It is not an exaggeration to say that Fed policy has enabled zombie companies and made ravenous debt monsters of corporations and governments alike. It has the entire economy dangerously far out on a limb.

As we begin the second half of 2021, it is time to assess the overlooked financial dangers ahead in the second half. Overlooked because the entire world is breathing a sigh of relief that normalcy is returning on many fronts. And yet, the excesses that have been accumulating, especially in the last two years, demand reckoning.

Among the greatest excess is how Federal Reserve interest rate machinations have enabled the growth of “zombie companies.” These are companies that earn less than the cost of what they must borrow to stay afloat. Without the Fed’s massive purchase of trillions of dollars of bonds to buy down interest rates with money conjured up digitally out of thin air, these zombies would not have access to the credit that allows them to borrow at artificial and unsustainably low-interest rates – and go deeper and deeper into debt.

We last wrote about this class of corporations back in March, citing a description from Motley Fool: “Zombie companies, you see, aren’t earning the capital needed to invest in and build their businesses, which helps the country; rather they’re a huge drain on America.”

This chart of the 10-year U.S. Treasury yield illustrates the extent of the Fed’s interest rate manipulation over the past four decades. It is this intervention that enables the walking dead. 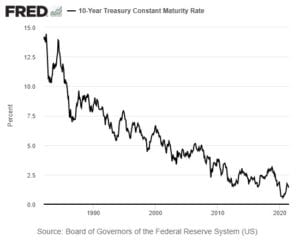 A Fourth of July piece in the Financial Times comments on the proliferation of zombie companies: “Easy money flowing out of the Fed is threatening to weaken the dollar and feeding the rise of zombies — companies which earn too little to make even interest payments on their debt. They barely existed in the US 20 years ago but accounted for 6 percent of listed companies by 2010, and almost 20 percent by last year.”

But it is not just companies with one foot in the grave that have their debt appetites whet by the endless gusher of Fed liquidity. Central bank interventions have other companies and governments themselves drowning in an ocean of red ink. The U.S. budget shortfall this year is tracking at $3 trillion.

From the same Financial Times article: “The federal government and corporations are now so deep in debt, it is hard to imagine how they can further boost the economy. In 2010, the US owed the rest of the world $2.5 trillion, a sum equal to 17 per cent of US GDP. By early last year, those liabilities had risen to $10 trillion and more than 50 per cent of GDP — a threshold that has often triggered currency crises in the past. Currently, they are $14 trillion and 67 per cent of GDP.”

We note the extraordinary increase as well in leveraged speculation thanks to Fed rate policy distortions. The financial world was shocked just days ago after House testimony expressed that hedge funds are employing huge leverage in rampant cryptocurrency speculation.

Leverage is a powerful tool, but it must never be forgotten that its power works both on the way up and the way down.

It is not an exaggeration to say that Fed policy has enabled zombie companies and made ravenous debt monsters of corporations and governments alike.

It has the entire economy dangerously far out on a limb, but at least we have the lessons of history to guide us. For thousands of years, people have relied on precious metals to protect them from corrupt and irresponsible monetary and currency practices.

As we wrote in our Independence Day commentary, a monetary system built on gold and silver was supposed to protect us all from the consequences of the distortions we have described. But today, you must protect your wealth, family, and retirement with gold and silver for yourself.

Nobody else is going to do it for you. Let us help you protect your retirement. Give us a call for your free one-on-one consultation.