And now both the House and the Senate have passed President Biden’s $1.9 trillion stimulus plan.

Some may be alarmed at this.  We can just hear them citing the apocryphal expression by the late-Senator Everett Dirksen back in the 1960s:  “A trillion here and a trillion there, and pretty soon you’re talking about real money!”

Okay, actually the quote was “a billion here, and a billion there…”  We changed it to trillion because a billion dollars isn’t what it used to be.

The debt is going to keep growing like that, especially since Washington has just passed the $1.9 trillion Biden “stimmy” plan.  Yes, that’s what some grown-ups are calling it:  “stimmy.”  That’s a pretty insouciant name for something that costs nearly $2 trillion. 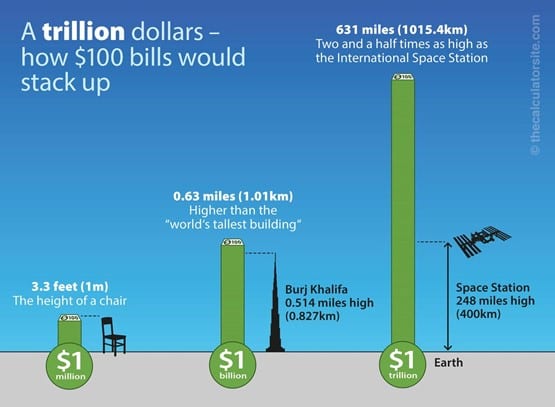 But then a trillion dollars isn’t what it used to be.

Sure, a trillion is a huge number.  But the Federal Reserve can just print dollars as fast as it wants.  It printed more than $2.8 trillion in the last 12 months.

All that Fed money printing explains why the dollar is just a shadow of its former self.  It has lost 93 percent of its value under the Fed’s watch.

More money printing demands are just ahead.  The Biden infrastructure plan could cost as much as $4 trillion according to Goldman Sachs.  The Fed will have to put its shoulder to the money printing wheel to fund that.

As many as 15 t0 20 percent of America’s large corporations are like zombies, the walking dead.  They earn less than their cost of what they must borrow to stay afloat.  Here is how a Motley Fool piece describes them:

“Without the Federal Reserve purchasing corporate bonds and allowing these failing companies access to credit, these faltering firms would likely have failed. The Fed, by keeping unproductive and ailing corporations alive and not allowing a natural death to take place, has created a dangerous and gruesome mess — one so pervasive that U.S. economic growth could be delayed for years.

“Zombie companies, you see, aren’t earning the capital needed to invest in and build their businesses, which helps the country; rather they’re a huge drain on America. Note that the United States has fostered zombie companies for the past decade, but the pandemic and the lockdowns greatly worsened the problem.”

The Fed will have to work the printing presses around the clock to keep all those zombies limping along.

You could call the US government biggest zombie of all.  It is the world’s greatest debtor, yet it does not have the revenue to stay solvent.

Ahh, but unlike other zombies, it has the Fed to print whatever it needs.

As we have described, Fed officials and its hundreds of economists (perhaps thousands if you count contract recipients, consultants, and others) are busy trying to figure out how to keep the game going.

We will say more about that in the future.  But at the rate we are headed before long a trillion dollars won’t be what it once was, either.

Gold is still what it once was.  Just as a yard is still 36 inches, and a pound is still 16 ounces, gold is a standard of measure in dependable monetary systems.

It is better to protect yourself and profit with gold now.  Then you can relax before people will start wondering what comes after a quadrillion.