Instead of the U.S. monetary system protecting your wealth with gold and silver as the Founding Fathers intended, today, you must protect your wealth, family, and retirement for yourself.

Fourth of July ball games, weekend getaways to the beach, and cookouts are all a part of the American Independence Day celebration, and we welcome their return!

When a small group of colonists prevailed against the mightiest nation on earth, the British Empire, they created the conditions for an explosion of human prosperity — one that’s been emulated far and wide.

Not to be forgotten among the gatherings of friends and family are the monetary lessons that accompanied the founding of the Republic.

It was a destructive episode for the people of the new nation, but sometimes hard lessons are learned best. So, in creating the Constitution, the founders made sure to incorporate provisions that would protect the people from the governments’ propensity to corrupt the monetary system.

Learned men, well-read in the historical precedents, the founders incorporated a gold and silver monetary system in the Constitution.

Congress was empowered to coin—not print—money — this was intentional. Clearly, the delegates to the Constitutional Convention knew the difference between coinage and paper money. Similarly, several states were forbidden by Article 1, Section 10, to make “anything but gold and silver coin a tender in the payment of debts.”

Never mind the clear language of the Constitution, today gold and silver are nowhere to be found in the U.S. monetary system.

That happened despite the best efforts of men like Washington, Franklin, and Madison (Jefferson agreed with them about the evils of unbacked paper money but was representing the U.S. in France at the time).

What does it mean that gold and silver are missing from the U.S. monetary system?

It means that instead of the U.S. monetary system protecting your wealth with gold and silver as the founders intended, today you must protect your wealth, your family, and your retirement for yourself.

That is enough history for now, except to note that we are approaching this summer the 50th anniversary of the end of the dollar’s last link to gold. We will have more to say about that in August.

For now, we observe that the U.S. money measurement M1 has rocketed from $4 trillion in January 2020 to $19 trillion today.

The Federal Reserve is doing what Congress did in the “not worth a Continental” era, except on a much larger scale. 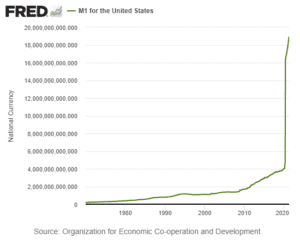 Even the mainstream press is starting to notice. Behind what it called “the gusher of money” (they are beginning to sound like us!), the Wall Street Journal noted, “multiple rounds of fiscal stimulus totaling around $6 trillion…”

Secretly, Fed officials who understand what is going on must be sweating bullets. U.S. deficit-funded spending shows no sign of being reigned in. When interest rates normalize – as they will – the cost of funding the debt will demand even greater gushers of made-up money, Fed money.

The people can’t pay for all the government’s empty promises.

Here is a rather frightening reality check for millions of Americans. It’s from a letter sent to financial blogger Mish Shedlock: “Do you honestly believe that millennials who are living with their parents into their thirties, and who are $50,000 or more in hock for college degrees they will never use, will be able to foot the bill for Baby Boomers’ Medicare and Social Security?”

In other words, today, you must protect your wealth, your family, and your retirement for yourself. Let us help you declare your independence from a decaying monetary system. Give us a call for your free one-on-one consultation.