Inflation, Stagflation, and Hyperinflation: What Are They, How Do They Impact You?

What’s the difference between inflation, stagflation, and hyperinflation?

The first is inflation. It’s already here. It’s in the house.

The second is stagflation. It’s on the doorstep.

The third is hyperinflation. Some see it headed down our street.

(The fourth is deflation. It’s like the opposite of inflation. We’ll address it someday when it becomes a genuine threat to our prosperity. Today is not that day.)

You must take steps to protect yourself from the three ‘flations. They are all destructive. They destroy prosperity, threaten freedom, and invite a host of social ills into our daily lives.  Let us take each one in turn.

Inflation has clearly broken down the front door and entered our daily lives. At the beginning of this year, inflation was 1.7%

In no time at all, it has tripled. 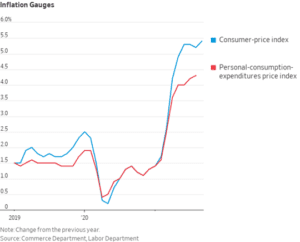 For the 12 months ending September 30, the CPI was up 5.4%. Yet even in the face of that breakout, the Federal Reserve continues to print another $120 billion each and every month. Since, as Milton Friedman taught, it takes time for current money printing to work its way into consumer prices, we think it is fair to say not only that inflation is in the house, but that it is making itself at home. It has taken off its shoes and intends to stay awhile.

Stagflation is an ugly period when inflation is accompanied by weak or negative economic growth. Not only are prices rising in stagflation, but business conditions turn down, earnings shrink or disappear, and jobs dry up. It’s a double-whammy for working families. No matter how fast people run, they fall behind.

What about “stag,” the economic stagnation part of the second ‘flation? The Atlanta Federal Reserve’s GDPNow project estimates that real GDP growth in the third quarter has collapsed to just 0.5%

We use the word “collapse” advisedly since that is down from its 6.3% estimate at the beginning of August. 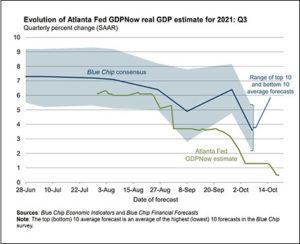 So it may be that stagflation is inside the front door already.

The third ‘flation that threatens the U.S., and your wealth and retirement is hyperinflation. Last week, Jack Dorsey, the co-founder and CEO of both Twitter and the digital payment system Square, created quite a stir when he tweeted, “Hyperinflation is going to change everything. It’s happening.”

There is not a specific inflation rate, like the exact temperatures at which water boils or freezes, that automatically qualifies as the “hyper” in hyperinflation. It instead describes inflation’s extremes, its inescapable, out-of-control, and destructive quality as it destroys the currency.

In the hyperinflation of France, merchants could be put to death for inquiring if their customers intended to pay with real money or the state’s rapidly deteriorating currency. In Germany’s hyperinflation, state authorities raided nightclubs and restaurants hoping to find customers who had foreign cash to steal, since Germany’s own currency was proving worthless. Germans who had annuities or cash value insurance plans found the postage to redeem their investments cost more than their face value. In Zimbabwe, government thugs were dispatched to beat up storekeepers who refused to accept increasingly valueless Zimbabwe dollars.

When does a country pass from inflation to hyperinflation? It’s impossible to say. But one constant seems to be that the monetary authorities deny that their money printing is responsible. So, they keep on printing. We have commented at least a couple of times this year about how disconcerting it is to hear Fed Chairman Powell go on at length about the causes of inflation’s return without mentioning the trillions of dollars the Fed has been printing of late.

RELATED — Fed Trading Scandal: Are Your Future and Wealth Really Being Protected?

Because these ‘flations can escalate rapidly, getting out of hand with little warning, it is hard to take any reassurance from Treasury Secretary Janet Yellen. Like her colleagues, Yellen failed to foresee today’s inflation just months ago. Reality now forces her to concede there is more inflation in the pipeline.

“I don’t think we’re about to lose control of inflation,” CNN reports. “On a 12-month basis, the inflation rate will remain high into next year because of what’s already happened. But I expect improvement by the middle to end of next year – second half of next year.”

Persistently climbing prices will eventually convince people that there is something wrong with the money itself. That is when they will turn suddenly to gold. One former Canadian mining senior executive recently warned that when people become aware of inflation dynamics, their move to gold “tends to be immediate and violent.”

“I’m talking about months,” said David Garofalo, former President and CEO of Goldcorp, Inc. “That’s why I’m quite confident that gold will achieve $3,000 an ounce in months, not years.”

We stress the same point. Things happen fast during ‘flations. Already, since the first of the year, inflation has tripled. We recommend our friends and clients take steps today to protect themselves from the ‘flations already in the pipeline.