Spending, debt, money printing, and inflation make up a dysfunctional financial family that enables one another. A train wreck is inevitable, and we recommend that you get out of harm’s way by protecting your family, wealth, and retirement with the enduring money of the ages: gold and silver.

According to the nation’s “financial newspaper of record,” “Americans should brace themselves for several years of higher inflation.”

Economists surveyed by The Wall Street Journal (WSJ) in July raised their forecasts of how high inflation would go and for how long, compared with their previous expectations in April…

“Survey respondents described a generational shift from the lower inflation of the past two decades—a shift that could create new challenges for households, policymakers, and investors who came to expect inflation closer to or below 2%…Higher inflation for several years would ripple through the economy. Consumers could find their household budgets squeezed. Higher borrowing costs could weigh on stock values and could crimp growth in interest-rate-sensitive industries like housing. Higher inflation can also make it harder for businesses to plan longer-term investments.”

We’ll resist saying things like, “what took them so long?” or “told you so!” Instead, we search such stories for signs of the role monetary policy plays in higher prices and the loss of purchasing power.

We search in vain. The WSJ report finds shifting demographics to blame and onshoring of manufacturing due to the pandemic shutdown. Sure, prices assimilate all kinds of economic factors, but since money is fully half of all financial transactions, you would think money printing might be mentioned. Think again.

A New York Times headline also caught our eye in May: “Inflation Is Here. What Now?”

It has become a game. We search such articles to see how they dance around the issue. The best the Times could do was this line: “Low-interest rate policies from the Fed have made financing cheap.”

With rare exceptions, it is low-interest “omertà,” the code of silence in organized crime, that prohibits the mainstream media from discussing what the Federal Reserve is doing to our money.

But it is getting hard to miss. Consider this:

The Consumer Price Index (CPI) rose 0.9% in June (try annualizing that. Double-digit inflation, anyone?). June’s number is up from 0.6% in May.

The consensus forecast by economists was too low, as they forecasted a 0.5% rise. So, they were off by 80%.

Over 12 months, the CPI climbed 5.4%. We learn from Bloomberg News that the central banks of the U.S. and Europe have created $9 trillion since the onset of the pandemic. That runs their total assets, purchased with fake money, to $24 trillion. The Federal Reserve is responsible for $8 trillion of that, which itself has ballooned by $4.2 trillion just since the beginning of 2020. 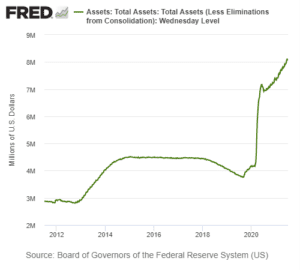 It’s hard to understand how such a dramatic change in monetary conditions can be so widely ignored. All this money printing is a consequence of the Fed helping fund government debt.

According to the Congressional Budget Office, this year the deficit will reach $3 trillion. For the second year in a row!

Government debt is a result of government spending. Since the pandemic, Washington has voted for a spending spree of $6 trillion in stimulus and bailout measures.

Spending, debt, money printing, and inflation make up a dysfunctional financial family that enables one another. However, deficit-financed spending funded by the Fed only puts dollars into people’s pockets to the degree that it dilutes the value of every existing dollar.

There is nothing new about the deceit of inflation. It has been practiced around the world for thousands of years. Almost 2,500 years ago, Dionysius I, the Greek tyrant of Syracuse, called in drachma silver coins and had them restamped to read two drachmas, nominally doubling the money supply.

And the list goes on: The Great Kahn of China who printed money on mulberry bark; the rulers of Europe who debased the gold and silver coins with lead; paper money printers from Argentina to Zimbabwe; and the central banks of Japan, Europe, and the U.S. today.

A train wreck is inevitable, and we recommend that you get out of harm’s way. Speak with us today about protecting your family, your wealth, and your retirement with the enduring money of the ages: gold and silver.

Give us a call for your free one-on-one consultation.