A Stagflation Economy All Over Again! Turn to Gold in Times Like These!

The way the Fed is handling inflation has us asking, "Are we back in the 1970s?" Let's take a look at some economic parallels between now and the Stagflation Decade.

“I know of no way of judging the future but by the past.” – Patrick Henry

The entire financial world is focused on the Federal Reserve’s latest rate hike. It is a worthy subject of concern and will be announced within hours of these comments being posted.

This constant “waiting on the Fed” syndrome, with the economy always hanging in the balance waiting for the next interest rate change, strikes us as one of the major uncertainties of a very uncertain period.

The Fed announces what it will do and then doesn’t do it. It announces that its next rate hike is not likely to be more than so and so. Then, weeks later, the Fed pivots, setting rates where it said it wouldn’t. Sources reliably close to the Fed appear to leak what the next increase will be, followed by the Fed doing something different.

It reminds us very much of the 1970s, the Stagflation Decade. In his book The Dollar Meltdown, our friend Charles Goyette called rate volatility “shaken business syndrome” for the uncertainty it introduces to the financial environment:

To pick but one example of shaken business syndrome today, note how a few rate changes and the threat of others have affected both residential real estate buyers and sellers in just a few short months.

There are other parallels with the Stagflation Decade. At one point, the Bank for International Settlements in Basel, Switzerland, often described as the central bankers’ central bank, warned in understated banker’s language that if the U.S. didn’t do something about its inflation soon, it would not look favorably on the dollar remaining the world’s reserve currency. Today, central banks around the world are busy replacing their dollar reserves with gold. They don’t need encouragement from Basel.

RELATED: Inflation, Stagflation, and Hyperinflation: What Are They, How Do They Impact You?

Ireland is the latest example. Over the past 12 months, its central bank has doubled its gold reserves, from six to 12 tons.

China provides more evidence, but on a much larger scale. With an eye on the risk of possible conflict, China has dumped $100 billion in U.S. Treasuries in just the last six months. It is a substantial drop, down to $980.80 billion from a one-time high of $1.3 trillion.

At the same time, and predictably, Reuters reports that in June China’s importation of gold through Hong Kong increased five-fold.

Inflation Up. Growth Down. 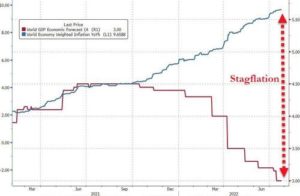 Here are just a few of today’s news headlines that would have been quite common throughout the Stagflation Decade:

Today, expecting more bad news to come, the Biden administration is working to preemptively change a long-standing definition of recession.

It’s all very Orwellian. But it is easier to change the language than it is to change hard and fast numbers. So here is what actually happened in the last Stagflation Decade. In the period from 1970 through 1979, the Dow Industrials rose 11.5 percent.

If you’d like to invest, let us provide you with a free one-on-one consultation.