Between central bank irresponsibility and the rising geopolitical standoffs, we are looking at risk on steroids. In such times, gold is the currency of first and last resort.

The week began with the news cycle completely given over to the Ukraine story and the threat of war. With time to fill but little real detail, much of it is he said, he said, and will he, won’t he speculation. One must also beware of political posturing, disinformation, and false flags campaigns.

In any case, by Tuesday, the story was about a Putin pullback from the brink. No one, least of all from this corner, can say exactly what will happen next in Ukraine and Eastern Europe, except to note that it remains a tinderbox.

At the same time, we have spent a lot of digital ink warning that geopolitical conditions are growing more dangerous by the day on fronts beyond Ukraine, including Taiwan. In April, we noted, “It is in the eruption of just such tensions that prevailing monetary structures are upended and that people find owning gold and silver to be a life-sustaining strategy for the protection of themselves and their families.”

Last month, we wrote, “The Federal Reserve’s failure to detect inflation’s return or comprehend its scope has crowded out attention to other vital developments that endanger your wealth. Chief among them is the threat of war, limited or otherwise.”

For those who might overlook gold’s importance in geopolitical crises, we point to the obvious. Since American foreign policy relies heavily on mandates and sanctions, it drives others, even purported U.S. allies, to take preemptive and defensive financial steps. That means erecting international trade-settling mechanisms to evade U.S. diktats. For that reason, as well as purchasing power destruction, the dollar’s dominance as a global reserve is in decline. Kinetic war will only accelerate its fall. More warfare spending adds to the deficits that drive more inflation. 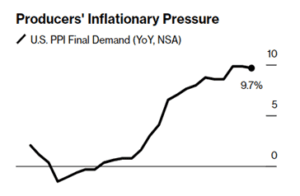 Meanwhile, inflation, already at generation highs, keeps on charging ahead.

The Producer Price Index (PPI), a measure of wholesale prices, gives us a peek at what is in the pipeline for future retail prices. The PPI increased by a full percentage point in January alone, and it was close to a record high for the 12-month period, at 9.7%.

Speaking of what is in the pipeline for future prices, petroleum will keep contributing to higher consumer prices.

Last year we wrote that the “doubling of the price of oil” was plausible. At the time oil was $72. It closed Monday at $95.46. Indeed, gasoline rose for 33 straight days, reminding us of the Dec. 7, 2021, piece in which we made the case for higher oil prices “without factoring in the growing prospects of a war of principals or proxies with Russia.”

Gold is making a powerfully bullish statement. As of Monday, it had climbed 10 of the last 11 trading days, a move higher of almost $90, taking it decisively above its near-term and long-term moving averages. Even with a Russian drawdown on Ukraine’s border, gold remains above Friday’s close.

That is the way markets climb. It is two steps forward and one step back. Until suddenly, the shooting starts, or the extent of the monetary crisis can no longer be hidden. Then, it is all forward and no back.

Between central bank irresponsibility and the rising geopolitical standoffs, we are looking at risk on steroids. In such times, gold is the currency of first and last resort.