The $30 Trillion Debt Bomb Cyclone Has Put Your Retirement Savings at Risk!

The U.S. national debt has surpassed $30 trillion. The government's actions have put your retirement savings at risk! Don't you want to protect your finances with money that they can't touch? Like gold? 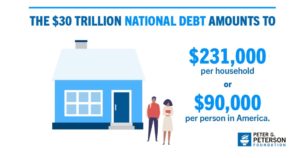 It turns out that America can’t spend its way to prosperity after all.

That has been the view of Washington’s dominant school of economists for close to a century now. Unfortunately, as this chart shows, reality has caught up with and exploded that myth. 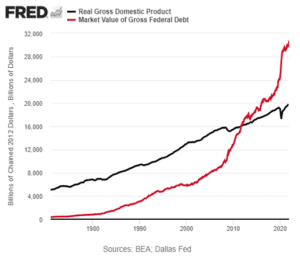 The red line represents the federal debt. The black line is the Gross Domestic Product, a measure of total U.S. productivity. The debt passed GDP in 2011 and has been outpacing productivity ever since. Put differently, it shows that the debt is not productive. A dollar of new debt no longer produces a dollar of GDP.

To show how fast things are spinning out of control, here are the dates on which the federal debt reached other benchmarks:

The “spend our way to prosperity” myth has been accompanied by other Washington myths about debt, like “we owe it to ourselves.” And by myths about money, too. Like the belief that printing money creates wealth.

Note, too, that the spiraling debt has happened despite the Fed having contrived the lowest interest rates in history, hoping to keep the debt viable. Not only has it not worked, but it has also produced the highest inflation in 40 years.

Repressed interest rates allow politicians to overlook the threat from the debt bomb cyclone, but it is very real. “Since 1800, 51 out of 52 countries with gross government debt greater than 130% have defaulted, either through restructuring, devaluation, high inflation, or outright default,“ reports Hirschmann Capital. Federal is now just over 130% of GDP. Including state and local debt, U.S. debt is 161% of GDP.

But none of those dozens of other countries would have defaulted if they had been able to keep interest rates low. They could not. Nor can the Fed hold the line on interest rates. This realization has been forced on it by inflation. Accordingly, the Fed has signaled that it intends to begin raising rates in March. Bank of America expects the Fed will implement seven quarter-percentage-point rate hikes this year. But that will still leave the Fed’s benchmark federal funds rate in negative territory, well below the inflation rate. That is a recipe for continuing inflation.

Meanwhile, it’s vital that those planning for retirement assess the dangers in a clear-eyed manner. Most Americans’ plans take into account expected Social Security and Medicare benefits. But the government views those obligations differently than it does the rest of its debt. Its apologists say that the U.S. debt is only about $23.5 trillion and that the other $6.5 trillion is money the government owes to itself.

Here is how that works: After paying today’s Social Security and Medicare claimants with the money you sent in for your future needs (which is exactly how a Ponzi scheme works), the government takes any excess revenue and loans it to the Treasury. That money then goes into the general fund and is spent, leaving you with an IOU.

Maybe this wouldn’t be a big concern if the government had no other debt. In that case, you might be comfortable that it would be able to meet its obligations to you. But the government debt is an enormous problem. Not only is it becoming a giant drag on the economy, but we also spend $900 million per day on interest on that debt, an amount that will grow as the Fed’s interest rate increases kick in.

Printing more money to pay debt in cheaper dollars is the time-honored expedient of governments that find things whirling out of control in debt bomb cyclones like this. As someone once said of our government’s practice of printing money to meet obligations, it means that they won’t exactly run out of dollars, but that the dollars will run out of purchasing power.

Make sure your savings and retirement plans include real money that is not subject to printing press devaluation. That means gold, the enduring money of the ages.