Baby boomers were raised to believe that hard work could bring them success, but a recent survey found that many boomers are no longer saving for retirement. Why is that?

If you were born between 1946 and 1964, you’re a baby boomer – and a child of the Greatest Generation. Baby boomers were raised on the belief that hard work could bring just about anything one desires, and their parents passed down an idyllic notion of American freedom – free enterprise, free markets, and free choice.

Baby boomers are notoriously self-assured, self-sufficient, and self-motivated. They’re an optimistic lot that has been greatly influenced by the dramatic breakthroughs of their time, particularly in science and space exploration, gender and racial equality, and personal computing and internet technology.

They are the kids of the moon landing, the Vietnam War, the Civil Rights Movement, the Cold War, and the Reagan Revolution. In terms of wealth accumulation, boomers have greatly benefited from the soaring affluence and surge in consumerism of the 1980s and 1990s.

Compared to the Gen Xers and the millennials that follow, boomers have generally cared less about making an impact and more about making money. They are now the richest generation in history and as they transition into retirement, concerns are being raised about rising life expectancy, shrinking Federal coffers, soaring beneficiary-to-worker ratios, and the soundness of Social Security, Medicare, and the Federal Government itself. And then there’s the question of realistic post-employment costs – for housing, transportation, food, and most importantly, medical care

For generations, retirement income has been based on what is known as the “three-legged stool,” which refers to private savings, an employer pension, and social security. The comparative is attributed to an actuary at the Metropolitan Life Insurance Company who referenced the various planning “legs” of retirement at a social security forum back in 1949.

So how are baby boomers faring in these categories?

According to the Insured Retirement Institute’s (IRI), “Boomers Expectations for Retirement 2019,” some 45% of baby boomers have no retirement savings. What’s perhaps more distressing is that about 1 in 5 had savings at one point but no longer do. So, why is that?

First of all, the oldest boomers, who would have been 65 back in 2011, reached their golden years while the U.S. was still mired in an economic malaise giving them little time to recover from the panicked selling, falling wages, and mass property depreciation of the financial crisis. Some remained on the sidelines and missed the stock rebound while others simply found it difficult to claw back amid the prolonged low-interest-rate environment that undercut the yields on bond funds. Secondly, a 2019 retirement survey by
GOBankingRates revealed that more than half of younger boomers are reporting less than $10,000 in savings as they’re still paying down debt, struggling with mortgage payments, and have little left over to put away. 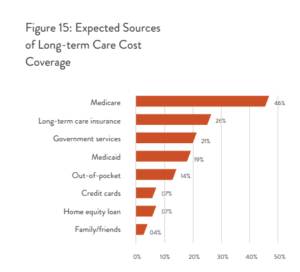 According to a recent AARP survey, 75% have not factored health care into their retirement planning.

The IRI also reports that boomers misunderstand what services Medicare and Medicaid will cover. Almost half believe that Medicare will pay for long-term care costs.

The Department of Health and Human Services expressly states, however, that, “Medicare does not pay for most long-term care services or personal care.” There are exceptions following certain hospitalizations and to prevent further decline from medical conditions like Parkinson’s or Alzheimer’s disease. But for the rest of the baby boomer population, private long-term care insurance is strongly urged and yet only about 8% own such a policy. Without sufficient cash on hand, an accurate cost analysis, or a clear grasp of federal health coverage – baby boomers are failing the private savings test.

There was a time when most workers had a “cradle to grave” relationship with their employers. Americans essentially devoted themselves to one company and in return for years of service, received a monthly “pension” check after retirement for as long as they lived. This is a defined benefit plan. And it is wholly funded and managed by the employer and guaranteed for life. A defined benefit plan can cover a significant portion of an employee’s salary, and it was once the Holy Grail of retirement income.

But as longevity increased, companies found it hard to make a profit burdened by hefty monthly payments to retirees some ten even twenty years after their farewell party. The cost of administering pension plans also skyrocketed prompting corporations to look for alternative ways to create post-retirement security for their workforce without going broke. They found it in section 401(k) of the Revenue Act of 1978 which contained a provision that allowed employees to funnel pre-tax dollars into a retirement plan. This shifted the responsibility from the employer to the employee, putting the latter in complete control of fund contributions and investment mix. The 401(k) has become popular with employers because it reduces their liabilities and is packed with tax incentives. Employees find the 401(k) an easy and effective way to save, and in many cases, their companies match their contributions.

According to a CNN study, the percentage of workers in the private sector that now hold a defined benefit pension plan as their only retirement account is just 4%, down from 60% in the 1980s. And industries that still offer traditional pensions like those negotiated by large unions like the steelworkers, auto workers, and public service workers – are actively trying to re-negotiate them away.

According to investment advisor and author Wes Moss, “Pensions are now the dinosaurs of retirement income. Once prevalent, pension benefits have gone by the wayside; almost entirely replaced by employee-driven retirement plans, such as 401(k)s.” The 401(k), a defined-contribution account was initially designed to supplement pension income but is now being used as the only source of retirement monies by countless baby boomers.

The demise of the defined benefit plan and the subsequent rise of the 401(k) has made baby boomers the first generation to navigate retirement more or less on their own, self-directing their money, determining the pace of savings, and dabbling in Wall Street at their own peril. They are also the first to approach their golden years without a guaranteed monthly check and longevity protection – meaning that if they outlive their savings, they’re simply out of luck. Unfortunately, for baby boomers, this has opened the door to risk and a looming retirement crisis. 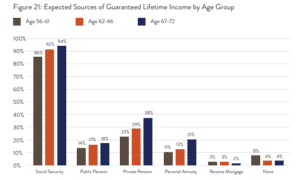 According to the Social Security Administration, 90% of today’s retirees receive social security benefits. The federal Old-Age, Survivors, and Disability Insurance program was established back in 1935 by President Franklin D. Roosevelt, but it was never meant to be a primary source of retirement income. Its original intent was to supplement low-income workers for several years during retirement. Today it provides the majority of retirement income for most U.S. seniors. According to the Center on Budget and Policy Priorities (CBPP), “for about half of seniors, it provides at least 50 percent of their income, and for about 1 in 4 seniors, it provides at least 90 percent of income.” This was never the purpose of the program. It was always intended to replace a portion of pre-retirement income based on lifetime earnings. Social Security benefits are far more modest than people realize and at best, provide a foundation upon which to build a more robust retirement plan.

According to AARP, the average social security benefit in 2020 is about $1,503 a month, or just $18,036 a year – which is far less than the standard working wage. The Bureau of Labor Statistics (BLS) estimates that 65+ households spend about $45,756 a year or $3,800 a month and typical expenditures include household, automobile/transportation, family care, medical/health, and living expenses. According to the BLS, the monthly breakdown looks roughly like this: Housing: $1,322, Transportation: $567, Healthcare: $499, Food: $483, Personal insurance/pension: $237.

Throughout the life of the average baby boomer, Social Security has faced numerous funding shortfalls. In the 1970s the program fell out of actuarial balance for the first time in its history and remained in an annual deficit from 1975-1981. President Ronald Reagan created a commission to try to keep Social Security afloat which resulted in raising the retirement age and taxing benefits. President George W. Bush also grappled with solvency issues but neither the Bush administration nor the Obama administration took definitive
action to put the program back in the black or keep it financially stable long term.

The program has the funds to pay benefits for the next 16 years but will then face a critical shortfall – and that deficit, according to the CBPP, amounts to about 1 percent of gross domestic product (GDP) over the next 75 years, and about 1.4% of GDP in the 75th year. Policymakers must address Social Security’s funding shortages. Its ongoing “Rob-Peter-to-pay-Paul” strategy will not only consume a vast portion of national resources going forward – but could very well jeopardize social security benefits for the younger baby boomers who contributed to the program over many decades.

Read to talk more about your retirement about how you can utilize precious metals in your portfolio? Give us a call at (844) 824-5051.

Kaylee Merchak is an industry journalist, who monitors the latest headlines and trends to bring you the latest on economic and geopolitical issues that impact your savings.

The Government is DESTROYING Your Retirement Fund! Take Action NOW!