Prices are Soaring. Is Something Worse Than Stagflation on the Horizon?

Inflation is a problem, and there is a growing and justifiable consensus that the U.S. economy is moving into a painful period of stagflation. But what if it's actually moving toward something worse?

“Historical analysis shows that gold returns averaged 25% in years when inflation was above 5%.” – World Gold Council

A Barron’s headline reads, “Inflation Is a Problem. Today’s PPI Just Confirms It.” It refers to news that producer (wholesale) prices are rising at a 10% annual rate. That follows hard on the news that consumer prices rose 7.9% over the last 12 months.

Yes, inflation is a problem, and there is a growing and justifiable consensus that the U.S. economy is moving into a painful period of stagflation, defined as price inflation in a slow-or no-growth economy.

But what if it’s something worse?

We suppose a word could be made up for an inflationary depression (infression?), but the thing adequately describes itself: price inflation while the economy is not simply failing to grow but is actually contracting.

The stagnant part of stagflation, or a recession, is normally thought of as an event that will last only a few months and is accompanied by a decline in productivity and growing joblessness. Recessions occur frequently.

A depression is something much more severe. The U.S. hasn’t experienced one since the Great Depression of the 1930s. It lasted more than a decade. Unemployment rose to 25%.

Oh, and the stock market collapsed.

Some people think that a depression also means deflation, falling consumer prices. But most depressions have been inflationary ones.

Depressions are the offspring of the correction of unsound monetary and credit conditions and are nourished by trade wars, embargos, sanctions, and assets being frozen. Biden has imposed severe sanctions on Afghanistan. Canada froze private accounts and even the private crowdfunding service GoFundMe bowed to Trudeau. And in a major precedent, the U.S. froze the foreign exchange assets of Russia’s central bank. The Washington Post called it “a Rubicon-crossing move”; another analyst called it a “monetary earthquake.” They are quite right. All such moves have unforeseen consequences and, in the aggregate, contribute to the breakdown of the post-World War II monetary order that is already underway.

Similar episodes in the past taught informed investors to protect themselves and profit from them with gold. That is because moves that impede trade and impair credit or expose assets to seizure raise suspicions about the future value of currencies.  Nobody wants to be left holding the Old Maid of a depreciating, illiquid currency.

A no-growth economy with money-losing purchasing power is bad enough, but the squeeze that people experience when money is failing and prices are rising during a depression is almost too awful to contemplate. People who count on their stock market investments or their dollar savings suffer along with everyone else.

As living standards collapse, fear rules the day. President Franklin Roosevelt was right to identify fear as one of the prevailing conditions of the Great Depression. He famously proclaimed that the only thing people had to fear was fear itself, but people certainly also had grounds to fear bad economic policies.

There are ample grounds to fear bad economic policies today. Years of needless money printing have driven inflation to double-digit levels. The Federal Reserve’s own playbook of Keynesian economics calls for monetary easing during downturns, but during the recovery that lasted more than 10 years, from June 2009 to February 2020, the Fed kept right on printing money. 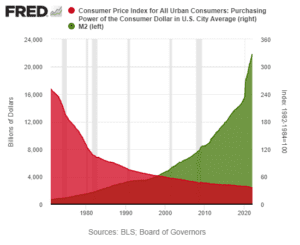 At the same time, the monetary earthquake conditions described above raise the possibility that something worse than stagflation, something perhaps triggered by Russian defaults, may be looming. It’s too bad that it has come to this. We hope you will take steps to secure your resources and protect your retirement with gold.