How Concerned Are You About Inflation in the U.S.?

More than three out of four Americans are concerned that inflation is headed our way, according to a new survey.

The CivicScience survey of more than 2,600 respondents found heightened concern about inflation even among Americans too young to remember the wealth destruction of the Stagflation Decade, the 1970s. 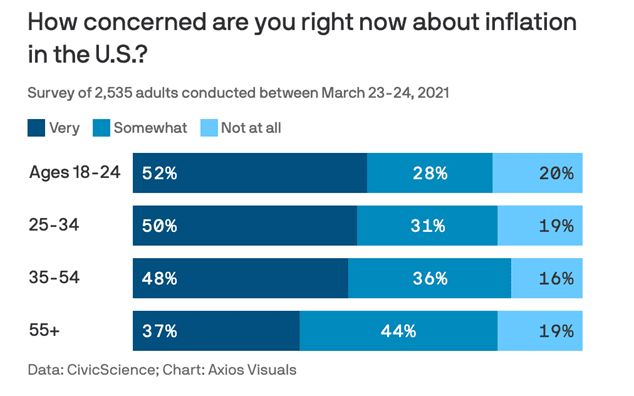 The reckless explosion of the money supply – M2 is up 27 percent in the past year, an increase of $4.2 trillion dollars – is a harbinger of higher prices throughout the economy.  The inflationary impact is apparent at the wholesale level in the price of corn, copper, credit, and Chinese imports, not to mention the rising prices that are more visible to consumers such as in gasoline and home prices.

Speculators, day-traders, and hot money hedge funds see these things, too, but they only care about the next role of the dice and not what tomorrow brings.

However the looming shadow of inflation is being taken very seriously by some of the biggest banks.  They also see dynamics developing for higher gold and silver prices that the hot money crowd on Wall Street misses.

Wells Fargo has a gold price target of $2,100 to $2,200 this year.  The bank’s real asset strategist John LaForge says gold supplies have now become “deficient.”  Says LaForge, “Such times in the past have sparked some of gold’s strongest price rallies.”

“We believe gold could be on the eve of a new commodity bull super-cycle, which would be only the seventh since the year 1800,” he says.

”Gold prices have climbed over 40% since 2018, and we believe that more gains lie ahead.”

Bank of America analysts are paying close attention to silver’s supply/demand fundamentals and are calling for higher silver this year as well.  A commodity analysts’ report from BofA notes a silver supply deficit this year and foresees a nine percent increase in demand:

On solar demand BofA says, “As governments decarbonize economies, solar panels have become more important globally. In the US, solar and wind energy are set to be gaining market share in the coming years under our base case scenario, which could be accelerated, if President Biden reduces emission from the power sector”

Of silver demand in the automotive sector the analysts write, “Given silver is such an effective metal in conducting electricity, the metal is popular with the automotive industry…. [Electric vehicles (EVs)] and [Hybrid election vehicles (HEVs)] run on electricity, they have much higher silver loadings. It is at the same time noteworthy that silver content comes in a range for cars with a combustion engine; in fact, mild-hybrid vehicles, which will likely remain a mainstay of the auto industry, tend to have higher silver loadings than vehicles with a combustion engine alone.”

Meanwhile, the US Mint continues to have trouble meeting investor demand for its popular US gold and silver Eagle coins.  According to an article in Numismatic News, the Mint has not been able to acquire sufficient metals and that “global shortages of physical gold and silver inventories have been rampant for more than a year now.”

For these reasons, we encourage people who have been considering acquiring gold and silver for profit and long-term asset and retirement protection to take advantage of today’s price break to enter the market aggressively.  We also recommend that experienced precious metals  investors take this opportunity to add to their portfolios.