Gold and Silver See More Inflation Ahead! Be Prepared!

When President Nixon suspended the dollar’s redeemability in gold, it was, he said, temporary. That was 49 years ago. Today, on no real evidence, Federal Reserve officials from the top down are sticking to the script: The inflation you see is just temporary.

Temporary? Where have we heard that before?

When President Nixon suspended the dollar’s redeemability in gold, it was, he said, temporary. That was 49 years ago.

Today, on no real evidence, Federal Reserve officials from the top down are sticking to the script: The inflation you see is just temporary. Federal Governor Christopher Waller says, “Whatever temporary surge in inflation we see right now is not going to last.” The talking point echoes throughout the marbled halls of the Marriner Eccles building and even down the street to 1500 Pennsylvania Ave. where Secretary Janet Yellen repeats it in the Treasury Building.

Still, inflation is surging. The precious metal markets, sensitive inflation barometers, see it. Both gold and silver quietly chalked up big gains in May. Gold was up 7.8%. Silver rose 8.2%.

As you can see, the CRB Index has exploded off its pandemic low. 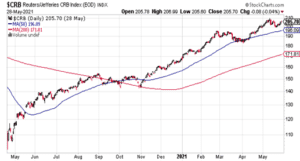 Let us take a quick look at the numbers:

First, the “Core Personal Consumption Expenditures.” This index, which excludes food and energy, is among the Fed’s preferred measures. Of course, it is. After all, who eats or depends on energy to keep civilization functioning (We will return to this “core” business in a moment)?

Not only does the Fed have a terrible track record in seeing what lies ahead, it is enlightening to see the extremes it has gone to in an effort to suppress inconvenient inflation data. Economist Stephen Roach recently wrote about the beginning of his career in the 1970s when he worked for then-Fed Chairman Arthur Burns.

Roach relates that in what would become known as the Great Inflation of the 1970s, over his staff’s objections, Burns pioneered excluding energy prices from the Fed’s inflation calculation.

“It was a blunder of epic proportions,” writes Roach.

Later, with food prices surging, Burns insisted food also be excluded from the CPI. And thus “core” inflation was born.

Burns presided over the wild gyrations of interest rates in the 1970s. The Nixon White House tapes show Nixon and Burns conferring in 1971 and 1972 about timing Fed interest rate policies to goose the economy in time for Nixon’s 1972 reelection. “Time is getting short. We want to get this economy going,” said Burns in a phone conversation less than a year before the election.

The lesson should be clear. For all the talk of the Fed’s independence, it is a political body and acts in political ways. Today, for example, the Fed is moving beyond its monetary mandates to embrace climate change and “woke” policies.

No matter what you may think of climate change and wokeness, a wise man once proclaimed it a law that government entities perform their legitimate functions in a manner inversely proportional to extent to which they busy itself in matters outside their authorized sphere.

So, the record shows that the Fed will even skew so-called objective reports in inventive ways for political reasons. While the statistics can be skewed, the damage inflation did to the economy under Burns was hard to conceal. Gold and silver soared.

The takeaway for today is that when the Fed insists inflation is temporary, its pronouncements are not to be taken as reliable.

We will let Professor Roach sum it all up.

“The Fed poured fuel on the Great Inflation by allowing real interest rates to plunge into negative territory in the 1970s. Today, the federal funds rate is currently more than 2.5 percentage points below the inflation rate. Now, add open-ended quantitative easing – some $120 billion per month injected into frothy financial markets – and the largest fiscal stimulus in post-World War II history. All of this is occurring precisely when a post-pandemic boom is absorbing slack capacity at an unprecedented rate. This policy gambit is in a league of its own.”

Let us provide you with a free one-on-one consultation to show you how precious metals can protect your wealth and your retirement. Contact us now.