Gold reverses course to fall 1% as flight for cash resumes

“Gold erased early gains to fall more than 1% on Wednesday as mounting fears over the economic hit from the coronavirus overshadowed additional stimulus measures by the United States and prompted investors to sell metals to hoard cash. Spot gold fell 1.1% to $1,511.72 per ounce by 0701 GMT. U.S. gold futures were down 0.9% to $1,512.10 an ounce.  ‘The fact that equity markets are still falling is signalling deteriorating global sentiment, which means more investors are going for cash,’ said Michael McCarthy, chief strategist at CMC Markets.

‘Globally, we are lengthening our expectations of how long the economic interruptions from the virus will last and that’s another reason driving people to cash.’ U.S. stock futures and several Asian shares fell in choppy trade as worries about the virus eclipsed hopes broad policy support would combat the economic fallout of the outbreak.  The U.S. dollar eased, but hovered near a four-week high scaled on Tuesday against key rivals, making gold costlier for investors holding other currencies.

The Fed it would reinstate a funding facility used during the 2008 financial crisis to get credit directly to businesses and households as fears over liquidity due to the virus have grown in recent days.” “Stocks, bonds and commodities fell Wednesday in a simultaneous selloff that suggests investors and companies are trying to raise cash as rapidly as possible to cope with the economic disruption sparked by the coronavirus pandemic.  The Dow Jones Industrial Average fell 1,190 points, or 5.7%, to 20064 shortly after the opening bell. The S&P 500 dropped 5.3% and the Nasdaq Composite declined 5.1%. Oil, meanwhile, plunged to its lowest level in more than 17 years on concerns about the economic impact of the outbreak.

Investors are even shunning assets that are normally considered the safest like long-term government bonds and gold, which rarely happens when riskier assets like stocks are also falling. Yields on government bonds in most major economies including the U.S., Japan and across Europe rose sharply, while investors sheltered in the shortest-term government debt and cash. Investors are grappling with wanting to buy safe assets, but also taking into account the substantial amount of long-term debt governments will have to issue in order to pay for stimulus efforts unveiled in recent days.” 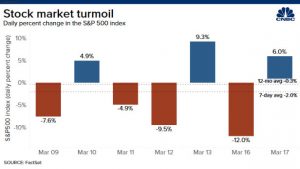 “Stocks tumbled on Wednesday as the markets remained highly volatile with the government response to the coronavirus fallout still unfolding. A violent reversal in Treasury yields in response to a potential $1 trillion stimulus package helped to unnerve investors. The Dow Jones Industrial Average dropped 1400 points, or more than 6.5%. The S&P 500 dipped 6.1% while the Nasdaq Composite fell almost 5%. Wall Street has been on an unprecedented roller-coaster ride amid the coronavirus turmoil, with the S&P 500 swinging 4% or more in either direction for seven consecutive sessions through Tuesday’s close. This tops the previous record of six days from November 1929, according to LPL Financial. Stocks continued their volatile streak on Wednesday, with another drop of more than 4%. The S&P 500 is 29.5% off its record high.

Bill Ackman, billionaire investor and founder of Pershing Square Capital Management, said the best remedy the market downturn and outbreak in the U.S. is for President Donald Trump to shut down the country. ‘Mr. President, the only answer is to shut down the country for the next 30 days and close the borders. Tell all Americans that you are putting us on an extended Spring Break at home with family,’ Ackman said on Twitter.” “The economic pain caused by the coronavirus epidemic could be even worse than the Great Financial Crisis.  That’s according to Scott Minerd, chief investment officer at Guggenheim Investments, who noted that the Chinese economy is contracting at a 15% annual rate, while the European economy ‘is probably in a fairly severe recession.’ ‘If the United States is not already in a recession, it will enter one shortly,’ Minerd wrote. ‘While shutting down restaurants, schools and major events, a lot of people are going to be without a paycheck—people who probably don’t have $500 of savings in the bank—and they won’t be able to cover next month’s rent, their car payment, and their living expenses. Given this dynamic I see this getting much worse.’

‘The risk is that for the first time since the 1930s we are facing the possibility of a downward spiral into something akin to a global recession,’ he added. ‘We have at least a 10% to 20% chance that that’s the path we are on if policy makers don’t act quickly.’ Minerd argued that Washington, D.C. needs to think big to avoid this fate, writing that ‘we desperately need’ programs similar to the Troubled Asset Relief Program (TARP) approved by Congress in 2008, which made available $700 billion to the Treasury Department to buy assets from banks whose values were deeply depressed by the bursting of a bubble in real estate and the ensuing financial crisis. This time around, however, the U.S. economy will need a much bigger fund—upward of $2 trillion—to rescue “many industries,” rather than just the banks.”

$1 trillion deficits and near-zero rates. The worst way to enter a recession “Washington rushed to pump the American economy with emergency-style medicine in recent years — even though there was no emergency in sight.  Now, there really is a national emergency. And there’s a growing realization that Washington blew through a chunk of its recession-fighting ammo long before it was needed.  In 2019, unemployment was sitting at a 50-year low. Consumer spending was strong. The housing market was finally flourishing. And the stock market had never been higher.

Yet policymakers decided to inject costly stimulus into what was already the longest economic expansion in American history. The Federal Reserve, seeking to counter damage caused by the US-China trade war, fired off three of its remaining nine interest rate cuts in 2019.  Worse, Congress and the White House borrowed heavily to pay for spending surges and tax cuts to juice growth. None of it lived up to the hype.  Now the bill is still coming due. The federal deficit topped $1 trillion in 2019, long before the outbreak. ‘You’re supposed to have dry powder for the next crisis,’ said Kristina Hooper, chief global market strategist at Invesco. ‘When the history books are written, the government will certainly be faulted for taking on too much debt. The Fed will be faulted for maintaining ultra-accommodative rates.’ In fact, the Fed is already out of room to cut interest rates. After a pair of huge emergency rate cuts this month, rates are now at zero. Given that rates were already low, it’s not really clear how effective the latest cuts will be. Moreover, many American households and businesses won’t even be able to take advantage of the lower borrowing costs.” “The EU is banning travellers from outside the bloc for 30 days in an unprecedented move to seal its borders amid the coronavirus crisis. The measure is expected to apply to 26 EU states as well as Iceland, Liechtenstein, Norway and Switzerland. UK citizens will be unaffected. The ban came as deaths continued to soar in Italy and Spain, and France began a strict lockdown. Europe has been badly hit by the virus, which has killed 7,500 globally. More than 185,000 people have been infected worldwide, according to the World Health Organization.

The travel ban will affect all non-EU nationals from visiting the bloc, except long-term residents, family members of EU nationals and diplomats, cross-border and healthcare workers, and people transporting goods. Free travel is a cherished principle within the European border-free Schengen area. But in recent days many countries have unilaterally imposed full or partial border shutdowns in a bid to stop the spread of the coronavirus. This prompted the commission to propose that the bloc act in a more unified fashion and restrict entry to the union as a whole, at the urging of French President Emmanuel Macron. The measures were agreed in a video-summit between EU leaders on Tuesday afternoon and will now have to be implemented by member states. ‘They said they will immediately do that,’ said EU Commission chief Ursula von der Leyen at a press conference. ‘This is good, so that we have a unanimous and united approach [where] the external borders are concerned.’ The UK and the Republic of Ireland will be invited to join the measure.”