“Gold rebounded on Wednesday, a day after it posted its biggest one-day decline in nearly four months, as the coronavirus scare spurred safe-haven flows towards bullion and raised hopes of interest rate cuts by major central banks.  Spot gold rose 0.5% to $1,643.70 per ounce by 1302 GMT, having slumped as much as 1.9% in the previous session as investors took profits. U.S. gold futures eased 0.2% to $1,646.

‘It is a typical flight into safe havens after the coronavirus has spread not only to the Asian countries but also to Italy and Middle East,’ said Peter Fertig, an analyst at Quantitative Commodity Research.

‘There’s a possibility that the safe-haven has not yet reached its peak. The economic impacts have to be stronger than the market is currently pricing in. There is already a certain possibility for another Fed rate cut by 25 basis points.’  Investors have pushed up expectations for rate cuts from the U.S. Federal Reserve and European Central Bank. China’s central bank has also vowed it will take further steps to support the virus-hit economy.” 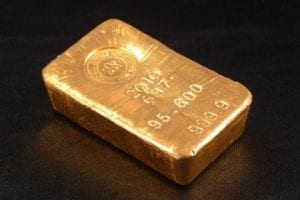 “Gold’s immediate fortunes are being dictated by the coronavirus outbreak, but the global macroeconomic backdrop is generally supportive for the metal, said the consultancy Metals Focus. High prices have hurt physical demand in vital gold-consuming countries, but this has been offset by investment buying, Metals Focus said Tuesday in a report titled, ‘Bull market for gold to remain in place for some time to come.’

Gold has been stronger lately, while stocks were on the defensive amid worries about the damage the virus could cause to the global economy. Initially, gold’s gains on the virus outbreak were limited, maybe on ideas that the impact would be short-lived, Metals Focus said. But that view began to change as companies began to warn about the potential impact on earnings, including a sales warning from Apple Inc. last week. Gold soared on to a seven-year high on Monday when the Dow Jones Industrial Average fell by more than 1,000 points, although the metal has since given back some of those gains. ‘In the very short term, investor sentiment will remain affected by coronavirus concerns; if the number of infections continues to surge, this will favor safe-haven assets,’ Metals Focus said.” “The stock market with the most to lose from a wider coronavirus outbreak is the one in the U.S. Global markets sold off on Monday and Tuesday on reports that authorities are struggling to contain the virus, which has now spread to more than 30 countries and increasingly threatens the global economy. Until this week, the declines in global stocks seemed to be driven by proximity to the virus’s epicenter in China, but it’s becoming clear that few markets will escape harm if the virus isn’t contained.

What’s not clear is which stock markets would suffer the sharpest declines. That obviously depends on how the crisis unfolds — where the virus spreads, how many people are affected, the impact on regional economies and trading routes, and so forth. But it also depends on the extent to which markets have already digested the potential risks, and by that criterion, the U.S. stock market appears particularly vulnerable.  To see stock investors at their most carefree, take a look at the NYSE FANG+ Index. It’s a pantheon of the Great Disruptors – 10 companies that many investors believe are poised to dominate their respective industries. In order of market value, they are Apple Inc., Amazon.com Inc., Google parent Alphabet Inc., Facebook Inc., Alibaba Group Holding Ltd., NVIDIA Corp., Netflix Inc., Tesla Inc., Baidu Inc. and Twitter Inc. As a group, they are among the most extravagantly priced stocks in history, even for growth stocks … If the virus turns out to be a serious and sustained threat to the global economy, markets are likely to rethink stock prices, including those of companies in the FANG index. And the higher the valuation, the greater the potential for downward revision.”

Why you probably own too many stocks “Investment portfolio diversification is right up there with motherhood and apple pie. That’s why it’s important to ask questions others don’t even think of asking. As Humphrey Neill, the father of contrarian analysis, reminded his clients: ‘When everyone thinks alike, everyone is likely to be wrong.’ A number of large actively-managed mutual funds are currently making outsized bets on just a few prominent stocks. These funds are hardly the picture of an adequately diversified portfolio. Consider four of the largest actively managed U.S. stock funds at mutual-fund giant Fidelity Investments: Contrafund, Blue Chip Growth, OTC, and Magellan. Their recent average allocation to five popular stocks — Alphabet, Amazon.com, Apple, Facebook and Microsoft— was almost double the weight those stocks have in the S&P 500 itself.

The emerging ‘winner take all’ economy is leading to greater concentration of market cap in a few mega stocks. The five stocks listed currently account for 17% of the S&P 500’s weight, and because they are so over-weighted in these large Fidelity funds, their average actual allocation is nearly double, at 29%. According to conventional wisdom, such a heavy allocation is the height of folly.”

The German Economy Was Faltering, Then Came the Coronavirus “Companies in Europe’s largest economy are rushing to limit the impact of the spreading coronavirus epidemic, which is hitting an already weakened German economy in a particularly painful spot: the supply chains of its export-oriented manufacturers. With this week’s outbreak in Italy, the infection has struck some of Germany’s top trade and economic partners just as the economy, long Europe’s main engine of growth, is reeling from a 7% drop in industrial production last year amid trade conflicts, a long-term slowdown in China, and global political uncertainties. In recent weeks, the nation’s trade-reliant businesses have been trying to unclog bottlenecks in complex global supply chains built up over decades. They frequently thread through China and Italy, two of the countries most affected by the virus.

Now there is concern that second-stage effects from the infection could hit the parts of the German economy that have so far resisted the downturn, from household consumption to tourism and services. In a blow to local hotels and restaurants, the cities of Frankfurt and Cologne on Tuesday called off two large trade fairs, citing the outbreak. And Deutsche Lufthansa AG said it was initiating cost-cutting and freezing some new hiring in response to the epidemic. Germany’s DAX 30 stock-market index fell more than 4% on Monday and was off another 1.9% on Tuesday, bringing it back to its level of late October.” “Drinks giant Diageo warned the coronavirus outbreak could hit profits by up to £200 million in 2020, as companies began to measure the impact of the epidemic. After weeks of ‘closely monitoring’ the virus and its potential damage to performance, companies have started to quantify its impact. French food company Danone cut its guidance on Wednesday and expects the virus to reduce first-quarter sales in China by €100 million. It comes after Mastercard cut its revenue outlook earlier this week and U.S. software giant HP factored in an 8% hit to its earnings per share for the second quarter, following Apple’s second-quarter guidance warning last week. Diageo — the British drinks company, whose brands include Johnnie Walker and Guinness — said sales had been hurt by the closure of bars and restaurants in China along with the postponement of events and fall in tourism across Asia.

It estimated that organic net sales in 2020 would be £225 million to £325 million lower as a result but that still depended on the ‘timing and pace of recovery,’ while operating profit would be £140 million to £200 million lower. The company, like many others, said it was unable to “quantify the impact” at its interim results at the end of January. Since then the virus has spread outside of China, across Asia and into Europe. More than 81,000 people have been infected world-wide and the death toll has risen above 2,750. Danone, the world’s largest yogurt maker and Evian water owner, lowered sales and profit margin forecasts for the year on Wednesday.”