Inflation has the Fed backed into a corner and committed to raising interest rates, which means slowing growth and declining stock and bond markets. Protect yourself from these losses with gold.

Goldman Sachs has issued a new report raising its forecast for the gold price this year. The bank decided to raise its 12-month price forecast from $2,000 per ounce to $2,150.

“Our economists forecast a material deceleration in U.S. growth, while the imminent prospect of a new hiking cycle is leading to a risk-off environment across long-duration asset classes,” the bank said in a statement. “For investors looking for a way to hedge their portfolios from risks of a growth–slowdown and falling valuations, we believe a long gold position would be more effective in the current macro environment.” 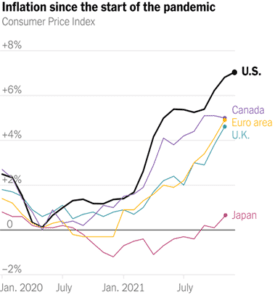 Stated differently, inflation has the Fed backed into a corner and committed to raising interest rates. This means slowing growth and declining stock and bond markets. Help protect yourself from these losses with gold.

Goldman Sachs’ bottom line: “In our view, this combination of slower growth and higher inflation should generate investment demand for gold, which we consider to be a defensive inflation hedge.”

At the same time, Goldman Sachs President John Waldron delivered an unusually blunt critique of the Fed, telling pension fund managers that its independence has been damaged in recent years and that it has lost credibility in markets.

A modern and complex society depends on the credibility of its institutions, as well as our ability to trust one another. Imagine what it would do to traffic if a failure of trust had everyone on every busy street stopping at every green light. We drive through green lights only because we trust that the people at the intersecting streets will stop when their light is red.

Imagine how it would undermine confidence in air travel if no one trusted the mechanics to apply the correct torque on engine mounts, or pilots to follow the prescribed checklists for takeoff and landing.

Trust is fundamental to civilization. It’s like capital. It takes time to build up, but it leverages productivity and makes civic life more comfortable.

Unfortunately, in our monetary affairs, trust is breaking down. Someone once said that inflation is like a country where no one tells the truth. That is so.

Perhaps you will have noticed the proliferation of gambling. That’s because the old virtues of thrift and saving lose their appeal when the purchasing power of the money evaporates. The shrewd, or people with superior insight into monetary conditions, prey upon the naïve in inflationary environments. People enter into agreements in hopes of paying their obligations in terms of cheaper dollars, the money of radically altered real value. Thus commerce, which in normal times is a matter of mutual advantage, becomes a question of who is going to be fleeced by future payments of indeterminate worth. Contracts may be abided by in letter, but not in spirit. The premium on business visionaries and entrepreneurs is supplanted by inflation’s imperative of aggressive accounting functionaries like inventory and cash management and thus innovation is lost.

The social fabric begins to fray. And with inflation at 40-year highs, who hasn’t noticed that? New York Times senior writer David Leonhardt observed this week that, by many measures, society is not functioning very well.

Financial writer Bill Bonner puts it this way: “When the money goes, everything goes.”

Gold stands apart from this decay. It’s no one’s liability. Its value doesn’t depend on the honesty or performance of a company or an asset manager or a bank. Nor is it dependent on the prudence of any government. Gold’s value is inherent, intrinsic. Gold is the most liquid commodity of all. And as we have become fond of saying, the government can’t print gold.

Nations know this themselves. Many times, we have seen governments extend loans to one another, insisting they be secured by gold. When the Versailles Treaty imposed reparations on Germany for the costs of World War I, the allies specified they wanted to be paid in gold. While the allies got gold, the German people instead got paper money – endlessly printed paper money – that ended up impoverishing them, destroying the social comity, and preparing the way for the ruinous Nazi regime.

“We think there is considerable upside potential in gold in a scenario where inflation increases significantly,” said Goldman Sachs. No doubt. But we also say to watch the waning credibility of the Fed and the fraying of social cohesion. Both promise much higher gold prices.