The guiding economic philosophy of the US government for almost a century can be reduced to this: we can spend our way to prosperity. It was at the basis of the Depression-era policies of Democrat Franklin Roosevelt and espoused by Republican Richard Nixon, who converted to the philosophy when he was elected president. It has remained an article of faith on both sides of the political divide in the new millennium.

“I do think were near the end of the line of this whole phony Keynesian central banking regime. Once confidence finally evaporates, there will be a massive stampede into real money.”

The guiding economic philosophy of the US government for almost a century can be reduced to this:  we can spend our way to prosperity.  It was at the basis of the Depression-era policies of Democrat Franklin Roosevelt and espoused by Republican Richard Nixon, who converted to the philosophy when he was elected president.  It has remained an article of faith on both sides of the political divide in the new millennium, endorsed on the right by Dick Cheney who announced that “deficits don’t matter,” and by Barack Obama on the left who trivialized the national debt, saying that “we owe it to  ourselves.”

To be more clear, the policy of deficit spending can be called “counter-cyclical fiscal management.”  The idea, as advanced by British economist John Maynard Keynes, is that the government should increase it spending during a downturn or recession, compensating for reduced business activity with deficit-financed spending.   As the Keynesian theory has it, once the economy recovers, the restoration of taxable activity would produce a tax surplus, which would allow the deficits to be paid off.

It was a theory fraught with economic pitfalls that are beyond the scope of this article, other than to note that, politicians being politicians, in general government deficit spending continued at new and greater levels even after the recoveries.

The business about paying off the deficits was forgotten along the way.

And that explains the growth of US government debt.

As 2020 began, the US debt was already climbing by about $100 billion dollars a month.  The country was on course to run a trillion-dollar deficit for Fiscal Year 2020 that began in October, a deficit that hadn’t been seen since the counter-cyclical spending that followed the housing bust and the Great Recession.

But this time the deficit was going to break through the almost unthinkable trillion-dollar barrier, not as an act of Keynesian counter-cyclical deficit spending, since the economy was more ten years into the recovery, the longest economic expansion in history.  Instead, trillion-dollar deficits were being normalized.

Then, in the middle of the fiscal year, the COVID-19 pandemic struck.

Suddenly, a deficit of “only” a trillion dollars could not even be seen in the rearview mirror.

Thanks to the CARES Act, the Families First Act, the Paycheck Protection Program and other legislative initiatives, almost overnight the US was on track to add $4.275 trillion in red ink for the year – more than it borrowed in than previous six years combined! 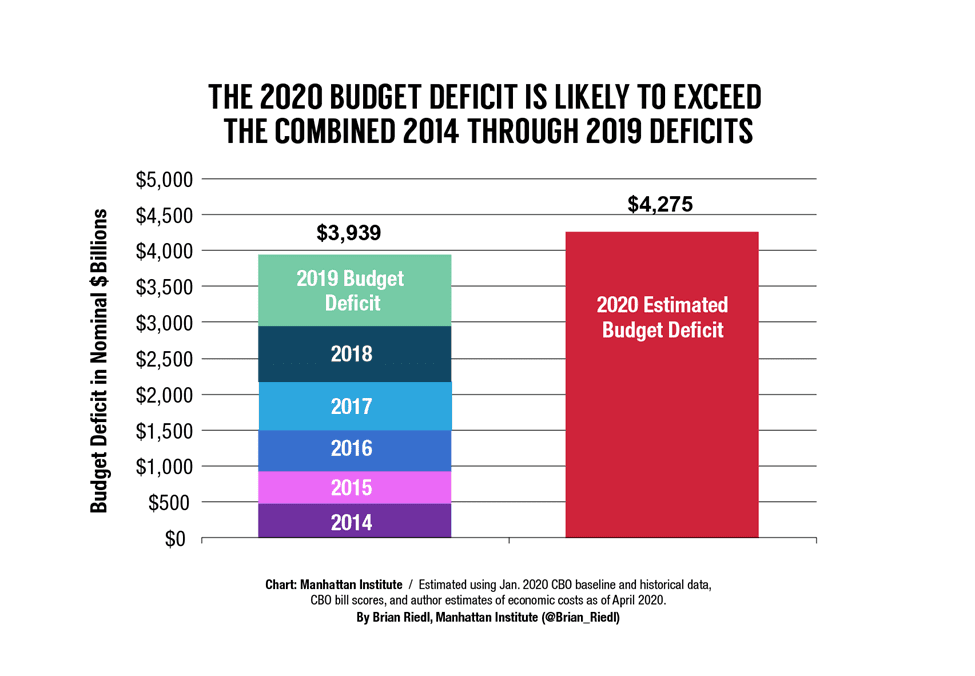 The following chart shows not only the explosion of the Federal Debt (in red) since the dollar was unlinked from gold in 1971, but shows how the debt-based dollar has pulled the price of gold up along with it as the debt has grown.

As US debt explodes, the question must be asked: what do we get for it?  In economic terms this is called “the marginal productivity of debt”—how many dollars of additional wealth are created with each additional dollar of debt?

Since the measure of national wealth is Gross Domestic Product (a flawed metric to be sure, but commonly used for such purposes), the question is: how much GDP growth do we get for ever-growing US debt?

Is the debt growing for sound reasons, to drive growth, or is it used to fund present consumption, like a farmer who consumes his seed corn over the winter and has nothing to plant in the spring?

We’re afraid the answer is that US debt is being used to fund present consumption. 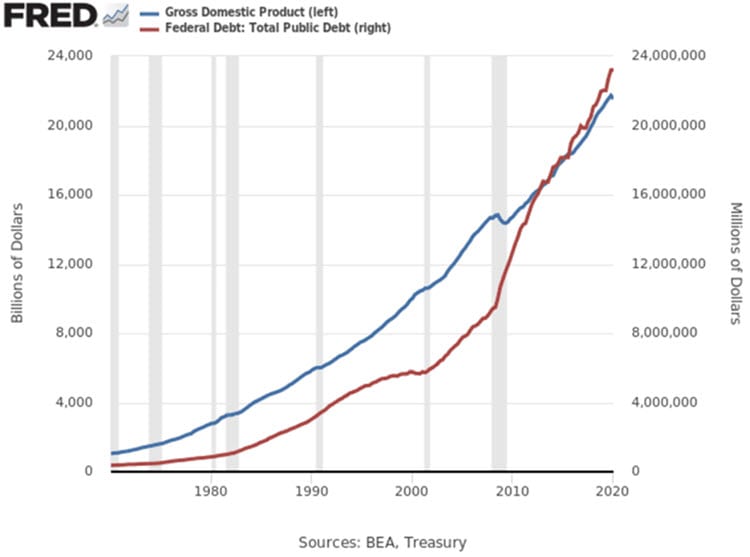 Gross federal debt passed GDP in 2012. Its growth has more or less continuously outpaced productivity ever since.  Expect returns on the national debt to continue diminishing as the impact of COVID-19 unfolds.  GDP will obviously shrink—perhaps precipitously—with the shutdown, unemployment, and their aftereffects, while the debt trajectory has turned sharply higher with the government’s new super-charged deficit spending.

How will the US fund its raging rivers of red ink?

The answer given by a class of politicians and economists for a generation, that we would grow our way out of it, is clearly inadequate.  Until the COVID-19 lockdown, the US had been in an economic expansion lasting ten years, more three times the average prior expansion.  Yet debt has continued to outpace.

If growth cannot fund the deficits, as the gap between receipts and spending widens, the remaining alternative is that the US intends to fund its red ink by means of monetary policy.

The Government is DESTROYING Your Retirement Fund! Take Action NOW!