A Different Approach on Inflation: Why Currencies Decay and Gold Doesn’t

We believe that gold, which the Fed can't print, and which doesn't decay, is essential to wealth preservation and retirement security in an inflationary regime like the one that has now landed on our doorstep.

It was only a few months ago, back in February, that America’s top monetary official was telling us not to expect “large and sustained” inflation.

After all, said Federal Reserve Chairman Jerome Powell, “Inflation has been much lower and more stable over the past three decades than in earlier times.”

But now, in the fourth quarter of 2021, no one needs much convincing that large and sustained inflation is proving to be the economic story of the year. The Fed’s preferred inflation measure, Personal Consumption Expenditure Price Index, rose 0.4% in August – a 12-month gain of 4.3%. That’s the biggest jump in 30 years!

Nobody needs much convincing about today’s inflation, especially those watching prices and wondering how to provide for their retirement.

But just for the record:

What went wrong? With hundreds of economists on the Fed’s payroll and hundreds more in academia being subsidized by the Fed, how did the monetary authorities miss this so badly? And why have they consistently missed the other big economic events like the dot-com bubble and the housing bubble?

Obviously, something is systemically wrong with their approach. They miss most important economic events because they think rising prices are caused by prices moving up. As though inflation is a spontaneous, self-arising phenomenon.

They don’t understand that a general rise in prices is an effect. Inflation is the result of an increase in the supply of money and credit.

(Actually, many of them do know this, but they are loathed to allow that to be incorporated in their policies. The ability to increase the supply of money and credit, to transfer wealth to intended recipients by inflation, for example, to bail out banks, is the sole source of their authority. It is what central banks do; it is the very reason they were created. But that is a discussion for another commentary.)

Still, we understand how easy it is to let monetary cause and effect get jumbled up. We often display charts illustrating rising prices with lines that go up. It is not wrong, and it is convenient. But in reality, it is the purchasing power of the dollar that is going down. That is the cause, and it should be shown, at least now and then, that higher prices are the consequence of a currency’s purchasing power decay.

So, at least this time, let us display inflation differently.

This chart, beginning in 1971 when the U.S. severed its last tie to the gold standard, shows (in green) the declining purchasing power of the dollar. Overlaid (in gold) is the dollar price of gold. 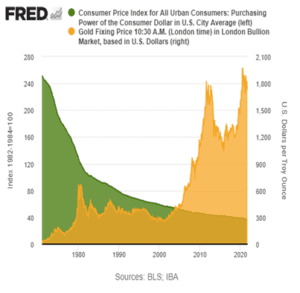 We think it is a clear and important description of currency decay. It also shows why gold – which the authorities cannot print and which does not decay – is essential to wealth preservation and retirement security in an inflationary regime like the one that has now landed on our doorstep.