Zimbabwe's central bank has introduced new gold coins for public purchase with the hopes of curbing inflation while helping the country's collapsing currency.

This summer, the Republic of Zimbabwe, a landlocked country in southern Africa suffering through a years-long economic and monetary crisis, began issuing gold coins as legal tender.

It’s important to get a sense of why it has done so. Once we know that, we’ll know why it should matter to gold investors around the world.

During the time that Robert Mugabe was president, Zimbabwe’s economy was devastated by hyperinflation.

The present government, which has been around only for five years since the coup that overthrew Mugabe, has tried a number of means by which to restore some fiscal and monetary rationality to the economy. Thus far, it’s had little success.

In the latest effort, on July 25, 2022, the Reserve Bank of Zimbabwe disbursed 2,000 gold coins to commercial banks. These first gold coins were actually minted outside the country, but eventually (according to John Mangudya, who is the governor of the RBZ), minting will be localized. 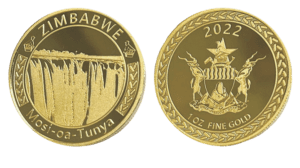 Each coin weighs one troy ounce and has a purity of 22 carats. At the time of launch, the cost of each coin was $1,824 USD. In general, their value will be determined by the international market rate for an ounce of gold plus the cost of production.

Any individual or company can purchase the coins from authorized outlets, like banks.

The central bank said the coins “will have liquid asset status, that is, it will be capable of being easily converted to cash, and will be tradable locally and internationally. The coin may also be used for transactional purposes,” adding that they can only be traded for cash 180 days after the purchase date.

The coins can also be used as security for loans and credit facilities.

Indirect Benefits for the “Common Man”

The issue is that many Zimbabweans struggle with daily survival, like paying for food, so they don’t have extra funds to buy the coins.

In the words of a Zimbabwean economist, Prosper Chitambara, who spoke to the Associated Press, “For the common man, there is not really much to benefit directly from this, especially if you don’t have any excess cash.”

But there is, Chitambara added, an expectation “that indirectly it will benefit the ordinary person through moderating the prices.” And that, given Zimbabwe’s tragic recent history, could be an important benefit indeed.

The two-track approach, and a confused effort to target exchange rates, exacerbated economic distortions. At the same time, foreign reserves dried up. The central bank responded by buying foreign currency on the “parallel market,” that is, the black market. This further undermined their exchange-rate targeting efforts.

Underlying and worsening those difficulties, the RBZ had no lawful means to resist the government’s demands for the creation of money. This was a period of fiat money creation in its pure form.

In February 2008, the inflation rate was officially deemed to be 165,000% year-to-year. Unfortunately, that was not the peak.

Soon thereafter, the government stopped even filing official inflation statistics, presumably because civil service accountants were in danger of injuring their hands by writing 0s over and over again. By November 2008, unofficial estimates say, the year-on-year inflation rate was 89.7 sextillion percent. (A sextillion is a thousand raised to the seventh power.)

The End and a Worrisome Restart

The wild ride came to an official end in 2009 when the government gave up on printing the Zimbabwean fiat dollars at all. People and businesses were told to use the foreign currency of their choice. The U.S. dollar became predominant, although other currencies, notably the South African rand, also circulated.

The subsequent history of Zimbabwe and its fiscal and monetary policies is complicated, but it continued to be calamitous. Let’s limit ourselves here to identifying four high points:

The general sense of economic chaos in Zimbabwe has not receded. Nor has the temptation, on the part of the government, to have the RBZ manufacture fiat money to resolve its fiscal difficulties.

The central bank’s decision to mint gold coins comes a year after it agreed to authorize miners to export some of their gold. For years before that, miners were only allowed to sell to the central bank itself, through the latter’s buying arm, Fidelity Printers and Refiners.

That effort at central control never really worked. According to the government’s own estimates, when private sales were prohibited outright, gold worth $1.2 billion was nonetheless leaving the country every year.

Most of the mining in Zimbabwe takes place through small-scale operations, and those miners could not survive the combination of the low prices and the late payments from the FPR without resorting to black market exports.

The gold still in the ground is a valuable resource for the country. Freeing up the mining industry and minting coins: each is a step to making good use of that resource. Last year, the chief executive of the Chamber of Mines, Isaac Kwesu, told a committee of parliament that the country had not carried out any meaningful exploration of gold deposits for a decade.

The chamber is confident, Kwesu said, “We have significant, extensive gold deposits in Zimbabwe, although we have not been exploring much.”

It’s true once again, as it was 15 years ago, that the central bank has no independence from the politicians, and the former can find no brakes so long as the latter can always find reasons to inflate.

Some of Zimbabwe’s neighbors have sought to avoid, or at least to mitigate, the inflationary temptation by joining together into a “common monetary union” of four nations. This union consists of South Africa, Namibia, Lesotho, and Eswatini. In South Africa, the unit of currency is the rand. The other three countries in the union also accept the rand as legal tender, even though each also has its own national currency. In each of those three cases, the local currency is pegged to the rand.

Since the end of apartheid and the removal of related sanctions, South Africa has built a large and diversified economy, fully integrated with the global markets. Such an economy does generally have some anti-inflationary inertia, and the other members of the common monetary union seek to benefit from that inertia by association.

Zimbabwe, though, is not likely to check its own inflationary temptations with such a tie. Indeed, the relations between Zimbabwe and South Africa have never been good. Early this year, South Africa worsened them by announcing that it wasn’t going to renew its “Zimbabwean Exemption Permits” (ZEPs), the documents legitimating the presence in that country of 180,000 Zimbabweans. This amounts to a demand that they return home.

So Zimbabwe has been casting about for a way to harden up its money against its own politicians’ inflating temptations and without a tie to the rand.

It’s fitting that they come around at last to the oldest idea of all: gold sovereign coins. That also bodes well for gold worldwide, as a confirmation of its status as the last and still the best of safe harbors for value.

If you’d like to invest or want to learn more, claim your free one-on-one consultation.

Christopher Faille has written on a variety of legal, regulatory, and financial issues for decades. He is the co-author of “Basic Economic Principles” (2000) and the author of “Gambling with Borrowed Chips” (2012). Faille was an early reporter with Lipper HedgeWorld and a senior financial correspondent with Reuters.