Watching the explosion of price inflation this year has Ron Paul wondering if 2022 will be the year of the crack-up boom.

Watching the explosion of price inflation this year, an event that took the authorities completely by surprise, has Ron Paul wondering if 2022 will be the year of the crack-up boom.

The former congressman, presidential contender, and gold expert sees the sudden eruption of prices, now climbing at rates that haven’t been seen in nearly 40 years, as an ominous sign.

The crack-up boom. It sounds threatening. And it should.

Economist Ludwig von Mises coined the term after living through the currency breakdown in Germany and Austria in the 1920s. In German, it had an equally foreboding name: The “Katastrophenhausse,” the catastrophe boom.

“The monetary system breaks down; all transactions in the money concerned cease; a panic makes its purchasing power vanish altogether. People return either to barter or to the use of another kind of money….” Mises said in his work “Human Action: A Treatise on Economics.”

The period of panic begins with the increase in the quantity of money, said Mises. From there it unfolds predictably.

Then finally the masses wake up. They become suddenly aware of the fact that inflation is a deliberate policy and will go on endlessly. A breakdown occurs. The crack-up boom appears. Everybody is anxious to swap his money against “real” goods, no matter whether he needs them or not, no matter how much money he has to pay for them. Within a very short time, within a few weeks or even days, the things which were used as money are no longer used as media of exchange. They become scrap paper. Nobody wants to give away anything against them.”

Crack-up booms have occurred in many places at many times. And it will happen again Mises said. “If a thing has to be used as a medium of exchange, public opinion must not believe that the quantity of this thing will increase beyond all bounds. Inflation is a policy that cannot last.”

Dr. Paul says the turning point is when the people all realize at once that inflation is not a bug in the monetary system; it’s a feature. The increase in the money supply is not an accident. It’s the result of a policy decision that the increase continues “beyond all bounds.”

Here is that policy decision rendered graphically. This chart shows the growth of the U.S. money supply, (M2 in green) since 1980, along with the gold price. The money supply has doubled in just eight years. It’s jumped 40% in just the last two years. 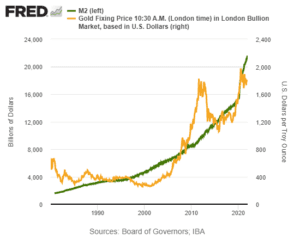 Money supply growth of 40% in two years is the stuff of banana republics. Consumer prices are playing catch up. As Mises explained about the early stages of inflation, “The prices of many goods and services are not yet adjusted to the altered money relation. There are still people in the country who have not yet become aware of the fact that they are confronted with a price revolution which will finally result in a considerable rise of all prices.”

According to Dr. Paul, “The crack-up boom will likely extend overseas as more countries reject the dollar’s world reserve currency status. This rejection will be driven by a combination of concern over America’s growing debt and resentment of America’s hyper-interventionist foreign policy.”

In the crack-up boom, warns Dr. Paul, for all those necessities of life that one can’t provide for himself, nothing is more important than real, reliable purchasing power.

That is where gold comes in. And that is where we come in. Let us provide you with a free one-on-one consultation to help you protect your retirement.

Before the crack-up boom because afterward is too late.