We’re in Trouble! What Was the Fed Thinking? Oh, Wait! It Wasn’t!

In 2020, Powell said that Fed officials weren't even "thinking about thinking about" the consequences of their actions. Well, here we are, two years later, paying the price for their failure to show some forethought.

In times of panic, be sure to own gold!

That’s the problem, isn’t it? They weren’t even thinking about thinking about what they were doing because, at the time, Powell and his confederates were in the middle of one of the greatest money-printing splurges of all time. They created about $4.8 trillion out of nothing at all.

The money wasn’t created by hard work, savings, or the production of valuable goods and services. It was created by digital bookkeeping entries. Computer keystrokes that created trillions of dollars out of nothing.

They should have thought about what they were doing: with their rash act of dollar creation, they were diluting the value of every other dollar in existence. They were watering down the drinks. They were changing the measuring unit of money, as surely as using a yardstick of 40 or 48 inches. They were inflating the amount of money and credit in the economy.

This chart from Federal Reserve data shows the massive growth in money printing (Fed assets in green) overlaid against the declining purchasing power of the U.S. dollar (shown in red) since the last Fed-induced crisis, the Great Recession. 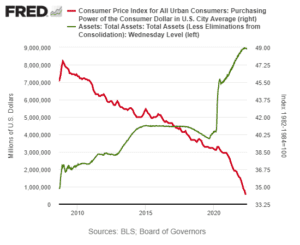 Now the authorities are confronted by the inflation they created. With inflation higher again last month, now at least 8.6%, the people are angry. Politicians are afraid of the people’s anger. They want Powell et al. to undo what they have done.

But it’s no different than Washington’s mountain of debt. That money has been spent. The debts are real. They can’t be wished away.

In this case, the money has already been printed. It has been spent on buying government and mortgage bonds and artificially lower interest rates. Not even a few interest rate increases can undo the damage. The price will have to be paid. As Bloomberg describes the Fed’s predicament, “the tighter it turns the screw, the more recession risks mount.“

Conditions have grown far too grim for us to take any satisfaction from it, but we have been warning about this day in the clearest possible terms for a long time. We warned repeatedly about the stock market, saying that it had been levitated to untenable heights by Fed money printing.

In July 2020, we pointed to David Stockman’s assessment: “You can’t run-up the NASDAQ to an all-time high in the face of this fiscal, monetary and economic mayhem, and on the strength of just ten stocks, and not expect that a thundering financial collapse lies just around the corner.” 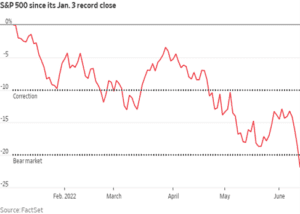 In March this year, we warned: “As the air comes out of an inflated stock market, do not ride it down and expect to make it all back eventually.” In the last stagflation decade, the 1970s, the stock market lost almost half its value in less than two years. Yet it took almost 20 years for it to recover in real terms. Remember that if the market falls 50 percent, it must climb 100 percent to get back to break even.“

Why has the Fed failed to take the necessary steps to do something about inflation? Because to this day, after being proven wrong about the strength and duration of inflation, Powell and his colleagues don’t really believe they’re responsible for it. They believe higher prices are mostly about the supply chains and Ukraine, while their creation of $8 trillion over the last 14 years – $4.5 over just the last couple of years – isn’t to blame.

That explains why the Fed malingered in dealing with inflation and misdiagnosed it as transitory. Even today, despite some in the financial press describing the Fed as finally determined and its rate increases as aggressive, the Fed continues to leave its policy rates well below the rate of inflation.

Rates remain deeply negative. The Fed knows that Washington can’t afford its debt as it is and that higher rates will usher in an existential crisis for the government. (More about that in a future commentary.)

As we have explained, the Fed’s interest rate interventions don’t have physical gold holders rushing to dealers to sell gold. To the contrary, the US Mint reports record sales of its gold coins. Instead, speculators on Wall Street are selling “paper” gold to meet margin calls in stocks, bonds, and cryptos. We don’t celebrate blood running in the markets or anyone’s financial distress. But we are not speculators, and we thank them for giving us a chance to protect our wealth and retirement by acquiring gold at lower prices.

When there is panic in the streets, it is a good time to own gold.