Warning to Retirees! OASI Fund Will be Insolvent by 2034, Report Finds

An annual report by the Social Security and Medicare Boards of Trustees found that the Old-Age and Survivors Trust Fund (OASI) will reach insolvency by 2034 -- one year sooner than last year's calculation.

In addition to our advance warnings about inflation’s destructive return, now apparent to everyone, we must raise an alert about another matter. This one threatens to wreck your retirement years and those of 93 million unprepared Americans.

The Social Security system, essential to the old age planning of Americans, is racing to a crack-up on the reefs of insolvency. 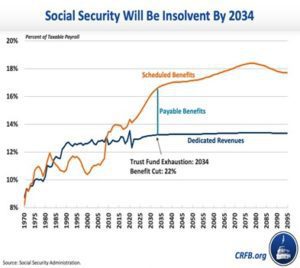 You need not take our word alone. The Social Security Trustees have just released their 2021 annual report to Congress. It finds that the Old-Age and Survivors Trust Fund (OASI), the fund from which monthly benefits retirees,  their spouses, and children and to survivors of deceased insured workers are paid, will reach insolvency in just 13 years, by 2034. That is one year sooner than was calculated just last year.

It means that when workers now 54 and younger reach full retirement age, the money will be gone. It’s worse for Medicare Part A, which becomes insolvent in just five years.

The solutions involve sharp tax increases, sharp benefit cuts, or a combination of both. But even those proposals, most of which are political dynamite, fail to tell the whole story. 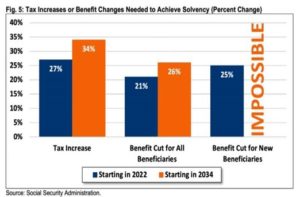 That is because Social Security is accounting fraud. Except for an unfunded government IOU, the Social Security Trust Fund is empty. The very name conceals this cruel reality. There is no security, no trust, and no fund.

This has proven to be a difficult reality for many Americans to grasp. But it is true, nevertheless, the money that you and other Americans paid into Social Security over your working years has all been spent. Congress spent the money and promised to make it good someday, somehow.

But the nation is already tossing about in treacherous waters with $28.5 trillion of debt that can only be funded by printing money of no objective value. And that debt does not even count the government IOUs that are supposed to be in the Social Security Trust Fund or in the Medicare Trust Fund.

All of this is political dynamite as we have said. It threatens intergenerational warfare. Shifting demographics mean that the number of workers for each aging Social Security recipient is falling; the cost of a retiree’s benefits is today shouldered by fewer workers. In 1945 the cost for one beneficiary was borne by 41 workers. Today there are only 2.7 workers carrying the load for each retiree.

Boomers expect that Washington will protect their Social Security benefits, but there are 16 U.S. senators in their 70s and 80s, most of whom will be gone soon. Their seats will then be held by representatives of younger Americans. As the number of millennials in Washington grows, the long-standing imperative to defend the primacy of boomer claims weakens.

Social Security’s insolvency will be addressed with some tinkering around the edges such as raising the age of eligibility and reducing benefits for the well-to-do. Such steps are de facto acknowledgments that Social Security is a welfare program rather than a retirement insurance program. As such, it will compete for funds with politically stronger claimants, the most sought-after voting groups, and special interests of the future.

The broad outcome is that nominal Social Security benefits will be met by the ever-ready expedient of printing money so the political classes can avoid having to both raise taxes and cut benefits. Social Security beneficiaries will continue to receive something close to their full benefits in nominal terms. But those payments will be made with dollars of sharply reduced purchasing power. Since food prices are already soaring, who will be surprised when what one once paid for steak eventually only pays for cat food?
Today one must chart the course of his retirement between inflation’s wealth destruction and the insolvency of the programs that figure so large in most retirement planning: Social Security and Medicare.

Navigating the true course is the same as it always is when the government’s promises are worthless tissues of lies and the money is debauched. Individuals must face reality and take steps to protect themselves with gold. That is because gold, prized through the centuries the world around, cannot be printed into worthlessness. Its value does not depend on empty political promises.

In the words of J.P. Morgan, “Money is gold, and nothing else.”

To learn more about investing in precious metals for retirement protection, let us provide you with a free one-on-one consultation.