by Sean Kelly As if COVID-19 weren’t enough, along with “expert” opinions that conflict with one another, and a lockdown that has given us depression-era levels of unemployment, the US government has now entered a red zone of debt that will plague us even after the coronavirus is just a bad memory. The latest news […]

As if COVID-19 weren’t enough, along with “expert” opinions that conflict with one another, and a lockdown that has given us depression-era levels of unemployment, the US government has now entered a red zone of debt that will plague us even after the coronavirus is just a bad memory.

The latest news this week is that in the current quarter (April-May-June) the US Treasury will have to borrow an unprecedented $3 trillion just to keep operating.

Altogether for fiscal year 2020, the US is on track to add $4.5 trillion in red ink.  That’s more than it borrowed in the previous five years combined!

We’re in this mess because tax revenues have collapsed thanks to shut-down businesses and record unemployment, at the same time government spending is on a booster rocket with more bailouts, stimulus checks, payments to farmers, payroll support, infrastructure spending, and other initiatives on the drawing boards that we won’t even bother to catalog.

It’s not just debt that’s in the red zone.  The Federal Reserve has stepped into the mix, too.

Let me frame it differently.  What does a government that already has $25 trillion in debt that it can’t pay do when it wants to spend trillions more?

It “prints” the money.

Here’s a chart that shows what we mean.  It’s a chart of what the Federal Reserve owns, Fed assets.  As you can see, it shows that the Fed carries more than $6.6 trillion of financial assets on its books — government bonds, mortgage and other securities, junk bonds, and other toxic assets. 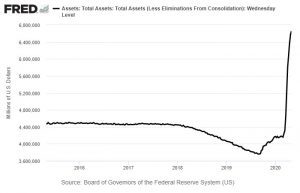 The Fed pays money for all these assets, more than $2.7 trillion in the past 12 months alone.  You can see that since late February, with the coronavirus shutdown, the trajectory of its purchases went straight up.

But where did it get the money?

It made it up.

The Fed just printed the money.  (Actually, since this is the digital age, it did it with a few simple computer keystrokes.  That’s even easier than printing money!)

All that new money, those new US dollars created with a keystroke, dilute the purchasing power of every other dollar.  Including the dollars you own.

And that explains why “the smart money” is buying gold.  People everywhere in the financial world are beginning to notice.  Fred Hickey writes an investment newsletter called The High Tech Strategist.  Even though his beat is technology, the other day he tweeted this:  “All the smart money: Dalio, Druckenmiller, Tudor Jones, Zell, Gundlach, Singer, Klarman, Einhorn, Mobius (and some who I know are loading up but are doing it quietly) are long gold…. Question is: What are YOU waiting for?”

Jim Rogers is certainly part of the smart money, too.  He co-founded the legendary Quantuum Fund and Soros Fund Management.  Rogers is buying precious metals for the first time in years because of the money-printing practices we described.

One of the nation’s largest banks summed it all up a few days ago, as it raised its own target price for gold by 50 percent.

It titled the report, “The Fed Can’t Print Gold!”

Now’s the Time to Turn to Gold and Silver for Wealth Preservation!

In Case of Emergency: Own Gold and Silver in the ‘Polycrisis!’

Gold, China, and the Future of Money

This Will be the Big Driver for Gold Prices in 2023