The Gold Dollar Died 50 Years Ago, but How is Impacting Us Today?

Fifty years ago, President Nixon cut the last tie the U.S. dollar had to gold, and the results for your savings and retirement have been grim.

Fifty years ago, this week, the last tie of the U.S. dollar to gold was severed by President Nixon.

The result for your dollar savings, wealth, and retirement has been grim. However, it’s not over yet because the dollar will eventually meet the fate of all promiscuously issued and irredeemable currencies.

Nixon was not much on monetary economics, but he was extremely adept at vote counting. Let us explain.

As president, Nixon made clear to his staff that he didn’t want to be bothered by international monetary matters or be given reports on them in the future. The Nixon White House tapes show the president brusquely waving off reports about the impact of the British floating the pound sterling and suggesting that it was all too complicated for him.

On Aug. 15, 1971, with an eye only on his reelection campaign beginning in a few months, Nixon rocked the world economic order by repudiating America’s promise to redeem U.S. dollars in gold.

Washington then, like today, was printing paper money like crazy, printing more U.S. dollars than it could redeem. And like today, prices were rising fast, threatening Nixon’s popularity. So, the president decided to remove any pretense that the dollar was still as good as gold. And at the same time, he froze prices throughout the economy to conceal and suppress rising prices.

It was a calamity. It quickly became known as the “Nixon Shock.” Store shelves soon emptied, thanks to the price controls, and a shortage economy became the order of the day.

The gold price began to climb and would eventually skyrocket in compensation for all the money printing. U.S. creditors around the world were fleeced out of billions of dollars. They had been assured that the U.S. dollar would always be as good as gold. But they discovered that the U.S. was writing a check on a gold account that was seriously overdrawn.

There is little evidence that Nixon understood the consequences of his act, his new economic policy.

But as we have noted, he did understand vote counting. Since his chief concern was his reelection, he was particularly afraid that in addressing the nation he would anger voters by pre-empting the popular TV show Bonanza. In fact, his advisors admitted that more time was spent on the timing of the speech than on how the economic program would work.

How has delinking the dollar from gold worked?

It first opened a decade of stagflation and the highest peacetime inflation in American history.

It has so far destroyed 85% of the dollar’s purchasing power, yet the assault continues. It has removed any meaningful restraint on U.S. money printing and debt, both of which have now blasted into a stratosphere measured by the trillions of dollars.

Things have spun so badly out of control on the paper dollar standard that just keeping the U.S. government-funded since Covid has required the Federal Reserve to purchase 74.6% of U.S. debt. Yet, Washington officials ignore the $28.5 trillion in visible debt and pretend that invisible debt of as much as $200 trillion simply does not exist.

This chart reflects the way repudiating the dollar’s gold guarantee for 50 years has enabled an explosion of federal debt. 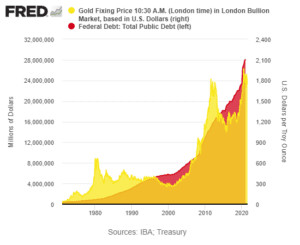 Abandoning gold has depressed U.S. growth, which averaged almost 4% per annum for the prior 20 years. That was then.

For the last dozen years, U.S. growth has averaged less than 1.5% per year. It has driven wide the U.S. wealth divide with grave implications for social cohesion yet to play out.

Comparisons with stock indices are badly misleading. Because company shares employed in the averages are changed often as companies fail or as they are replaced with trendier issues, the indices are defective measures of long-term value. General Motors, AT&T, and General Electric are among industrial mainstays that have been dropped from the Dow 30 along the way. But even as companies are substituted and replaced in the indices, gold has still outperformed the Dow Industrials over the half-century by several hundred percent.

For any who missed it last week, here again, is the picture the sums up the whole 50-year paper dollar vs. gold experiment.

It shows the subsequent fall in the dollar’s purchasing power (in green) versus the rise in the price of gold (in gold). 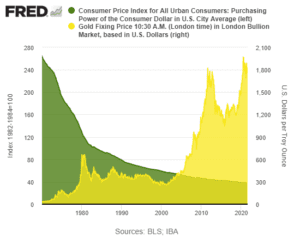 The biggest takeaway from the 50 years since the government abandoned gold is this: The Founders of this country went to great lengths to ensure that the U.S. would have a gold – and silver- based monetary system, so they made it explicit. They wanted the monetary system and the provisions of the new Constitution to protect the money from corruption and thereby to protect your wealth. But for 50 years now, the government has made clear that it will not protect your money and your wealth.

Because the U.S. monetary system is no longer tied to the honesty and objectivity of precious metals, you must protect your money and your wealth with gold and silver instead.

But that does not mean you are alone. We can help. Give us a call for your free one-on-one consultation.