Stagflation is Here, a Recession Could Be Next. Are You Prepared?

Experts say that stagflation is back, and a recession could be next. Is your retirement safe from what lies ahead?

At least our friends and clients are not being taken by surprise by the return of stagflation. We’ve been warning that it would make its destructive appearance soon.

Now it’s official. Stagflation is back!

We’re not the only ones saying so.

Stagflation is the hideous offspring of inflation and a shrinking economy. The inflation part, which is evident to everyone suffering at the gas pumps and in grocery store check-out lines, is back with a vengeance and at 40-year highs. But to make a bad situation much worse, the economy is now shrinking at the same time. Economists expected positive growth of around 1.1% in the first quarter.

RELATED: Inflation, Stagflation, and Hyperinflation: What Are They, How Do They Impact You?

Instead, the economy contracted 1.4%.

Today’s conditions have already begun to let the air out of both the stock market (have you seen Netflix and Amazon?) and the bond market.

There’s much more evidence that our economy is upside-down – more than just the rate of inflation and contraction. What’s the living experience of the people? How about this: An April Gallup poll reveals that 76% of Americans surveyed say the economy is getting worse.

Their pessimism is justified. In March, real disposable income was 19.9% lower than in March 2021. There’s corollary evidence that people are pulling back on their spending. If so, the second consecutive quarter of negative growth is at hand. 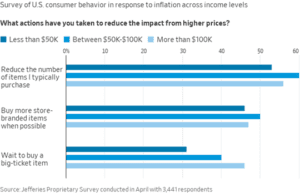 Now, as you know, we are not big fans of the funny-money-printing, spend-our-way-to-prosperity, deficits-don’t-matter thinking that is all the rage in Washington. That’s what got us into this mess of unpayable debt, a slowing economy, and rip-roaring inflation in the first place.

But even the Keynesian economic priesthood responsible for it all would be aghast at the prospect that within hours of our posting these remarks, the Fed will raise interest rates heading into a recession!

That means that the Fed is being forced by inflation to give up its policy of levitating the stock market with cheap money. The market knows it and is already coming apart.

In the last stagflation decade, the 1970s, the stock market lost almost half its value in less than two years. Yet, it took almost 20 years for it to recover in real terms. Remember that if the market falls 50%, it must climb 100% in order to break even.

The Fed is unleashing powerful economic forces that it doesn’t understand and can’t control. Meanwhile, a wider war and food shortages are silently lurking in the shadows of events to come.

Wealth preservation must be your priority during times of crisis. Begin by learning why gold outperforms during stagflation.