Despite what you think of the events in Ukraine, risk aversion and protecting your money are important for smart investors in a volatile world with roaring inflation. At this time, much of the post-World War II geopolitical order and monetary structure are falling apart. Yet, this risk also creates an opportunity for gold and gold investors.

In recognizing two separatist republics in eastern Ukraine, Donetsk and Luhansk, Russian President Vladimir Putin has acted entirely predictably. Markets are thought to be good at discounting future events, and in climbing over $100 in just a few weeks, gold seems to have been reading the Russia/Ukraine tea leaves quite well. 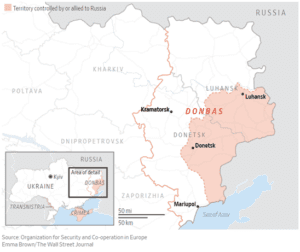 A “risk on steroids” is how we last described the geopolitical situation, especially when coupled with record-setting inflation (inflation that is still not being taken quite seriously by the Federal Reserve).

From a review of Putin’s address to the Russian people this week, it’s clear that the Russia/NATO conflict is only beginning. There is much more fallout to come, all of which will accrue to the benefit of gold investors. The Russian president is clear that Ukraine will not be allowed to be a vanguard of NATO expansion or a setting for the deployment of strike weapons on Russia’s borders.

Putin’s address is lengthy and detailed and merits a close reading. The gravity of the standoff he describes suggests a lose-lose for everyone, except gold investors, that is. At 3 p.m. on Tuesday, Feb. 22, the Dow was more than 600 points lower on the day, and with Fed rate hikes pending, bonds are not particularly alluring.

The West believes it can enforce its will with sanctions regimes. Again, from the Wall Street Journal: “Vice President Kamala Harris said the US and its allies would impose sweeping economic sanctions and export controls against Russia to target financial institutions, key industries and ‘those who aid and abet‘ an unprovoked invasion of Ukraine.”

Germany’s slowing of the Nord Stream pipeline is an example of the NATO nations being forced to shoot themselves in the foot. Russia already provides 40% of Europe’s liquid natural gas. The pain involved in acceding to US sanctions is great enough for Europe that it is already causing cracks in the trans-Atlantic alliance. A revolt across Europe against needlessly high energy prices would be characteristic of the populist revolts already in evidence in the West, from Brexit to the Canadian trucker strike.

But there is really no viable replacement for Russian natural gas in Europe, at least in the near term, as this snippet from Bretton Woods Research illustrates:

The US has reportedly asked Qatar to reroute LNG exports to Europe in the event of a Russian incursion into Ukraine. But today, Qatar’s energy minister, Saad al-Kaabi, explained the feat as being “almost impossible” in the short term. “Russia (provides) I think 30–40% of the supply to Europe. There is no single country that can replace that kind of volume. There isn’t the capacity to do that from LNG.“

Russian commodity production isn’t limited to natural gas. It produces 11% of the world’s oil supply and is a key producer of industrial metals, including steel, nickel, and aluminum. Higher prices across the commodity complex are another propellant for gold.

Meanwhile, as we have highlighted from time to time, the US chokehold on international trade settlements with the SWIFT system, used in sanctions regimes, has spurred de-dollarization movements around the world. De-dollarization means a dollar that is worth less.

Trade wars—of which this is one—raise prices and exacerbate supply chain problems. Bottling up Russian energy and other production means higher prices for everybody, including US consumers, already reeling from the highest inflation in 40 years.

No matter how one may feel about events in Ukraine, risk aversion and wealth protection are essential for informed investors caught in the vise of an unstable world and roaring inflation. This is quite an extraordinary moment, with much of the post-World War II geopolitical order and monetary structure toppling. But along with risk, it is full of opportunity and profit for those who understand gold’s unique and enduring role as the world’s money of choice.