Prices Are Going up, but Really, It’s the Value of the Dollar That’s Going Down

Everyone who buys products, earns a living, provides for a family, tries to live a better life, and saves for the future must understand that higher prices reflect a decline in the purchasing power of the dollar.

Every fourth-grader knows that even though we say the sun rises in the morning and sets in the evening, something else is going on.

Our position on the Earth is turning on its axis toward the sun in the morning and turning away from it in the evening. Unless you’re involved in some specialized activity such as planning to land an orbiting spacecraft, it probably does no harm to describe the morning and evening in a poetic way based on appearances.

But that’s not the case with everything. Appearances, we aren’t the first to say, can be deceiving. Especially when it comes to your money. Just look at the onrush of news about consumer prices. Here are a few examples:

According to CNN, General Mills has announced that in mid-January it will raise prices on hundreds of items and dozens of brands. “They include Annie’s, Progresso, Yoplait, Fruit Roll-Ups, Betty Crocker, Pillsbury, Cheerios, Cinnamon Toast Crunch, Lucky Charm’s, Wheaties, Reese’s Puffs, Trix and more…. For some items, prices will go up by around 20 percent beginning next year.” 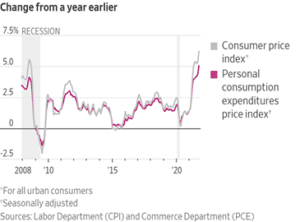 But it’s not just the price of Crest or Froot Loops that are going up. Everyone who fills a gas tank or is looking to buy or rent a place to live knows better.

Few people are involved in landing space vehicles. But living in a home, driving a car, and buying food and household goods are not specialized activities. No one can afford to judge what’s going on with prices in terms of appearances. Everyone who buys products, earns a living, provides for a family, tries to live a better life, and saves for the future must understand that higher prices reflect a decline in the purchasing power of the money.

Because money is half of every commercial transaction, this monetary decay affects everyone.

Throughout history, gold has been the yardstick against which currencies are proven successes or failures. Successful gold-based currencies have had many names, like the bezant, the florin, the pound, the dollar, and many others. While gold-based, they have helped create human prosperity. Failed paper currencies have had too many names to remember, scattered to the winds of history, leaving only ruin behind.

The U.S. average price of a gallon of regular unleaded gasoline this week is $3.38. That’s up from $2.12 a year ago. But that’s in terms of dollars, which we remember are losing their purchasing power.

What has happened to the price of gasoline in gold, in real, stable money? The New York Sun published a piece this month that answers that question. Unlike headlines in places like The Hill and Newsweek that scream “More pain at the pump!” and “Gas prices skyrocket!”, the Sun looks at gas prices through the lens of gold investors and a reliable gold-based currency.

Here are the facts:

As we write, an ounce of gold buys 528 gallons of gas.

In other words, using an honest and reliable yardstick instead of the Fed’s endlessly disgorged printing press money, gasoline is more affordable than ever.

Instead, the government should restore the integrity of the dollar with gold.

We don’t think that will happen. In fact, even Chairman Jerome Powell, the biggest money printer in the history of the Fed, has finally – finally! – quit saying inflation is “transitory.” In fact, as sure as the sun will appear to come up in the morning, the government will continue its legalized counterfeiting until it all collapses in a heaping pile of national suffering.

In the meantime, doesn’t it make sense to make gold central to your savings and retirement plans?