Because the gold price is the world’s referendum of the quantity and quality of the U.S. dollar, there are two fundamental forces at work that enable one to confidently foresee much higher prices ahead for gold (and its companion monetary metal silver).

Because the gold price is the world’s referendum of the quantity and quality of the U.S. dollar, there are two fundamental forces at work that enable one to confidently foresee much higher prices ahead for gold (and its companion monetary metal silver). 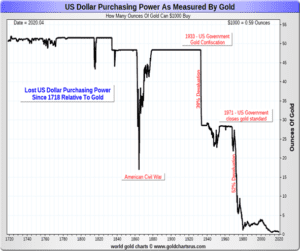 We have written about both many times. They are:

Helpful links: Modern Monetary Theory: Money does grow on trees and They’re Ganging Up Against the Dollar

Neither one of these trends has been a secret. Together they have conspired to drive gold prices from $20 an ounce on the gold standard to a recent high of more than $2,000.

Eleven years ago, Russia’s central bank was among the United States’ larger creditors. It held $180 in treasury debt instruments. Today, their position is so small one would have to search Treasury Department report footnotes to find it.

Other nations have begun moving away from the dollar, but along the way, treasury officials have been unconcerned. They have been whistling past the graveyard of the dollar reserve standard.

This month, de-dollarization moved out into the open. In what the financial press called “a bombshell.” Russia’s National Wealth Fund, the $119 billion repository of Russia’s energy profits, announced that it will no longer hold any U.S. dollars at all. It is not just a matter of adjusting its holdings for the foreign exchange needs of the day, more of one currency now, more of another later. Instead, this is a policy decision. Henceforth, it will hold a basket of currency-like assets consisting primarily of euros, yuan, and gold.

With that move, one Kremlin official pointed out that de-dollarization is now both “constant and visible to the naked eye.” As Ron Paul observed this week, “The weaponization of the U.S. dollar to bring the rest of the world to heel is backfiring.”

As Russia de-dollarizes, it pioneers alternative international account balancing and payment systems which includes gold components. Indeed, the move to gold by sovereign wealth funds and central banks is very bullish for gold. Those institutions buy in substantial amounts and hold for long terms.

Meanwhile, the explosion metaphors are getting a workout. If Russian de-dollarization is a “bombshell,” rising inflation “has global economies sitting on a timebomb.” So says Deutsche Bank in a new client advisory – and that is the second of the forces driving gold higher.

Deutsche Bank’s Chief Economist, David Folkerts-Landau, and his colleagues point to the massive expansion of the Fed’s balance sheet (digital money printing), now at $8 trillion. That means the amount of made-up, unbacked, digitally printed U.S. dollars has doubled in 20 months. 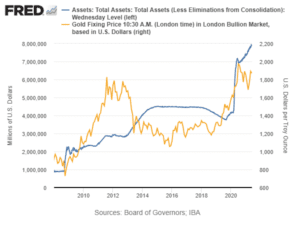 None of this is entirely new to readers of our Gold Watch commentaries. But with this update, we wish to underscore that both these forces have shifted into a higher gear. Deutsche Bank says Fed policies “could set off a chain of financial distress around the world.”

We agree, so Red Rock Secured is here to help you prepare.

Learn why gold and silver are central to protecting your family, your wealth, and your retirement from uncertainty. Let us provide you with a free one-on-one consultation.