Modern Monetary Theory – Thanks to the printing press money really does grow on trees. What does this mean for the price of gold?

“There are some ideas so absurd that only an intellectual could believe them.”

You might have heard from your parents when you were growing up that money doesn’t grow on trees.

It is a lesson the went unlearned by today’s monetary and political establishment.  Modern Monetary Theory – the malarkey that thanks to the printing press the government can afford to do anything – has become a frightening near-consensus in Washington.

Money growing on trees would seem like deprivation compared to MMT.  (See our earlier commentary Modern Monetary Theory and the Fate of the U.S. Dollar.)

It is not the first time the establishment has bought into absurd economic myths.  How many students learned in college classes that the national debt does not matter, since “we owe it to ourselves.”?   It is hard to get away with that one today since the US now owes foreign creditors China and Japan a trillion dollars apiece.

Here is another one: “It will pay for itself!”  That myth has been applied countless times to crony tax cuts or stimulus boondoggles.  The truth is they almost never pay for themselves.  It they did, we would not have a $28 trillion national debt today.

Federal Reserve chairman Powell says the government will “eventually” have to get things under control.

Powell says, “The U.S. federal budget is on an unsustainable path, meaning simply that the debt is growing meaningfully faster than the economy.  The current level of debt is very sustainable. And there’s no question of our ability to service and issue that debt for the foreseeable future [emphasis added].”

How he can say that with a straight face is a mystery.  For the six months of fiscal year 2021 ending March 31, total government receipts were $1.704 trillion.  Outlays totaled $3.410 trillion.  The government spent twice as much as it took in!

This cannot all be blamed on Covid-19 spending.  Waiting in the wings right now is the Biden “infrastructure” bill, $2.65 trillion of new spending and tax credits. And with MMT providing cover for what politicians to do what they want to do anyway – tax and spend – the political classes have a long list of other giveaways lined up.

The mainstream media and their commentariat never really bother to pierce the prevailing monetary myths or even to report much about what is happening with this “sustainable” debt.  So let us provide you with a couple of snapshots.

The one represents the growth of federal expenditures, year over year. 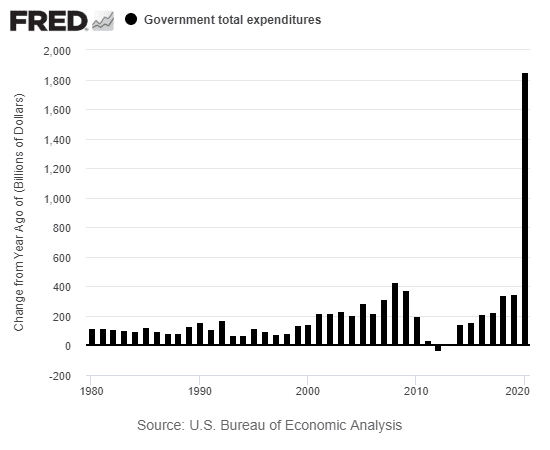 Once you catch your breath, look at the next chart.  It shows how all this government spending is paid.   The government borrows money by issuing US Treasury bonds.  The Federal Reserve enables this borrowing, by purchasing those Treasury bonds.  Today it has about $5 trillion of bonds. 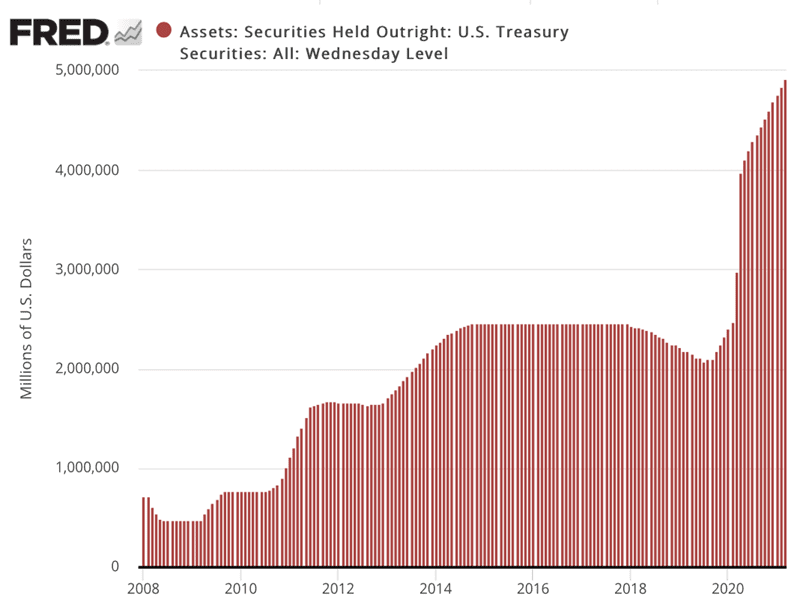 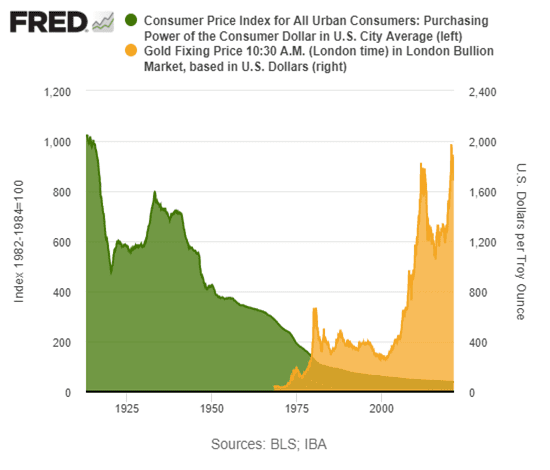 All this heralds a period of financial instability in the fiat (unbacked) dollar.  Fortunately, there is no mystery about the best way to preserve assets in such periods: use fiat money while you still can acquire money of real, intrinsic value.  Trade wasting assets for enduring assets.

But do not dither and delay.  The window to do so can close very quickly,