Legendary investor Jeremy Grantham, who predicted the last three market bubbles, believes the U.S. is in another "superbubble" that's about to pop. He fears that total losses for Americans could total $35 trillion.

Jeremy Grantham’s latest thoughts on where the stock market is headed are the talk of the investment world.

Financial news outlets blared the alert. The Drudge Report headlined, “End of Market Superbubble?” That was right next to the report that Jeff Bezos’ wealth had fallen by $20 billion.

“Today in the U.S. we are in the fourth superbubble of the last hundred years,“ said Grantham, co-founder and chief investment strategist of Grantham, Mayo, & Van Otterloo, in his latest advisory on Jan. 20, 2022.

So far, January’s stock market action has been volatile enough even without Grantham’s analysis. The Dow Jones Industrial Average has ranged from a high of 36,722 early this month to a low of 33,150, a loss of nearly 10% before clawing its way back in a short-covering rally to limit its losses slightly before the close on Monday. The S&P 500 trading pattern was the same, falling more than 12% from high to low this month.

But the stock market sell-off continued Tuesday. One commentator described it succinctly: Stocks were down “ferociously” by midday, he said.

Gold, as we expected, has been working its way higher.

RELATED: Is Your Money Safe From Market Spooks and Popping Bubbles?

When Grantham talks, especially about bubbles, people listen. Identifying bubbles has been a major component of his long career of spectacular success. And it is the kind of thing that should have people seeking the safety of gold for both profit and wealth preservation. Especially now, because, as Grantham warns, “for the first time in the U.S., we have simultaneous bubbles across all major asset classes” (stocks, bonds, and real estate) at the same time.

Grantham has been warning about today’s bubbles for some time. We last wrote about Grantham in July, when he was featured in the PBS documentary series Frontline. Back then, he was warning that the monetary authorities would not be able to keep the bubbles aloft. Sooner or later, prices would come back down.

Then, his tone became more alarming. In September, he said things might last a few more months, which he said would give people a little more time to prepare for what was coming.

Now “a few more months” are over. The superbubble has run through Grantham’s bubble checklist. Hence the title of his latest warning: “Let the wild rumpus begin!”

Grantham argues that bubbles have “blow-off” characteristics, “an accelerating rate of stock price growth to two or three times the average of the preceding bull market.” He provides this graphic evidence comparing the blow-off phase of prior stock market superbubbles with today’s pattern. 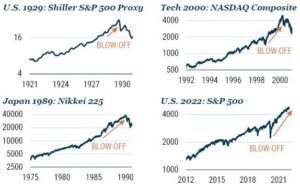 Just a word about how dangerous this superbubble is. According to Grantham, if these markets return even two-thirds of the way back to historical norms, total losses for Americans will amount to $35 trillion.

We urge you to take steps today to assure you do not contribute your retirement savings to the massive losses from the popping of today’s superbubbles.