Is the Fed Ever Going to Stop Inflation?

The Fed is hoping to corral inflation without triggering a recession. However, experts say that at the first sign of recession, the central bank will open up the monetary floodgates once again.

The Fed is hoping to kill inflation without triggering a recession. But there is another word for a recession: correction. A recession is a correction of prior monetary and fiscal excesses, unsustainable policies, and malinvestment.

The Fed’s recession-phobia reveals its priorities. At the first sign of a recession, the Fed will open up the monetary floodgates once again.

We have repeatedly pointed out the disconnect between what the Fed says about getting the highest inflation in decades under control and what it has actually done.

We noted just last week that the Fed has spent the last six months printing unbacked digital money at a 10% annual rate. That’s not the behavior of a central bank that’s dead set on corralling inflation. It makes protecting yourself with gold urgent.

Now a growing chorus of observers is echoing our questions about the Fed’s foot-dragging.

If you saw the 2015 movie The Big Short, you will remember Burry, the rock-drumming, hedge fund manager played by Christian Bale.

When disaster struck the subprime mortgage market, Burry’s clients made about $700 million from his fund.

The last time we cited Burry was at the beginning of 2021 when he correctly warned about coming inflation.

Now Burry is warning that the actions the Fed is telegraphing – raising interest rates and shrinking its balance sheet – are not intended to target inflation. Burry concludes that the Fed wants to give itself room for another round of “stimulus,” which will be ready to go when stock prices fall and the consumer is tapped out.

Tom Dyson, who writes for Bonner Investment Research, notes as well that inflation is not the Fed’s foe. Except for the bothersome rabble of Americans who foot the actual bill, inflation is the Fed’s friend. It’s the source of the Fed’s power. Deprived of the ability to control conditions of money and credit, the Fed becomes a toothless bureaucracy, a mere clearing house for processing checks between banks.

“Our core hypothesis,” writes Dyson, “is that overactive central banks have inflated history’s greatest credit bubble. Now, the big national governments, including the United States, are effectively bankrupt. The only way out of this predicament – without causing a worldwide depression – is through a globally synchronized currency devaluation (and we still may get the worldwide depression anyway.)”

“It’s already started. The inflation we’re seeing? That’s it. The inflation is a deliberate policy of reducing the amount of debt these governments must pay off.“

To elaborate on the point, the Fed is a creature of Congress, and it must enable Washington’s deficit-financed spending. It does that by buying government bonds.

The Fed and Washington have reached a crossroads now. With $30 trillion in debt that cannot be paid off, the Fed’s double-digit inflation this year has depreciated U.S. debt by $3 trillion. The nominal debt remains the same, $30 trillion, but the real value of the debt is now reckoned in cheaper dollars. Expect more of the same to come.

Because “there’s no such thing as a free lunch,” someone had to shoulder the cost of all this dollar cheapening.

It was you, as well as every other American consumer and holder of a U.S. dollar.

Bloomberg Economics calculates that the average American household must spend $5,200 more this year for the same consumption as last year. That’s inflation. The national debt has been devalued. You paid for it with a higher cost of living.

None of this can happen in a gold-based monetary system. As we are becoming noted for saying, “They cannot print gold.”

Take note of this chart of the dollar’s loss of purchasing power over the last half-century, since President Richard Nixon took us off the gold standard. 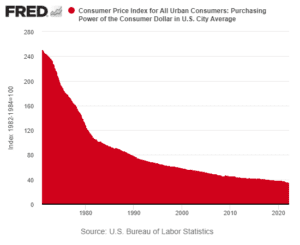 Here is a close-up of the same data for just the last 10 years. 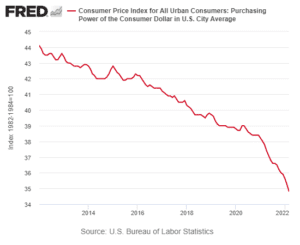 In the writing of the U.S. Constitution, Benjamin Franklin noted that nothing is certain but death and taxes. Because the founders created a monetary system based on gold and silver, Franklin didn’t have to mention the certainty of inflation. But today is different. If your assets, your savings, your wealth, and your retirement are denominated only in U.S. dollars, you will certainly continue to be victimized.