Many labeled President Ford's "Whip Inflation Now" campaign a misguided failure. Now, some are questioning whether President Biden's Inflation Reduction Act is one and the same.

We wish it were so. That inflation would be meaningfully reduced by a new bill in Washington. 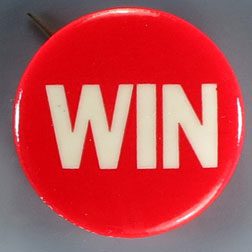 Back in the 1970s, President Gerald Ford launched a program called “Whip Inflation Now.” Millions of WIN buttons were printed for citizens to wear.

To help whip inflation, Americans were encouraged to plant gardens and carpool. Mothers were instructed to make their children wipe their dinner plates clean.

The idea was purportedly to engage citizen action against inflation. But it was really just a public relations exercise. Like today’s Inflation Reduction Act of 2022, Ford’s 1974 Whip Inflation Now program was launched just before the midterm election.

But seriously, folks, how could the mothers of America whip inflation? They weren’t the ones increasing the money supply; they weren’t the ones printing money. It was President Richard Nixon who de-linked the dollar from the discipline of gold and set off the inflation binge that had Ford calling for “a massive mobilization” of the people.

Two years later, even the Washington Post, a reliable champion of big, collective exercises with sweet-sounding names and big-spending measures full of vainglory, was calling it “one of the biggest public relations blunders ever.” Alan Greenspan was chairman of Ford’s Council of Economic Advisors at the time. He confessed in his memoirs many years later that he found the idea “unbelievably stupid.”

Too bad he didn’t say so at the time. Buttons notwithstanding, inflation just roared right on ahead, up to 12.3% by December of that year.

The same pitiless judgement – “blunder,” “stupid” – awaits the Inflation Reduction Act of 2022, which the Senate passed over the weekend.

Now, you may like or dislike the bill in whole or in part. But it most decidedly won’t stop inflation.

That is because the bill consists of fiscal measures: spending and taxation. If the government increases taxes, the money supply is not inflated. Taxation moves money from the people to the government. The government will have more money. The people will have less. But the amount of money remains unchanged.

Stopping inflation does not require a fight with inflation, a war on inflation, or much less a public relations campaign. It requires that the monetary authorities stop devaluing the purchasing power of the dollar through the artificial expansion of money and credit.

The Inflation Reduction Act is better understood with the Washington rule in mind, which says never to let a good crisis go to waste. If the Build Back Better bill couldn’t get passed on its own merits, just repackage it as a means to deal with the inflation crisis.

The act provides for the hiring of 87,000 new IRS agents, arming 70,000 of them. One senator observed that it makes the IRS bigger than the Pentagon plus the Department of State plus the FBI plus the border patrol combined.

An authoritarian measure of this severity demonstrates that Washington believes the tax laws are being widely ignored. That may be, but it will also widen any gulf between the people and the state; it is in the American DNA. You will remember that the Declaration of Independence complained that the King of England had sent “swarms of officers to harass our people and eat out their substance.”

It will also drive more people to move their financial affairs out of the dollar and off the grid. It will move people to preserve their wealth with gold. Even more will flee the dollar monetary system and turn to gold as the Federal Reserve nears the completion of its central bank digital currency. Already a Fed priority, it will be a total surveillance monetary system, tracking and reporting every single financial transaction of everyone, all of the time.

CBDC: The U.S. and the Digital Dollar

Clearly, the inflation crisis is not going to waste. One of the lessons of history is the extreme measures that accompany inflationary episodes. During France’s famous Reign of Terror inflation, the government mandated the death penalty for any merchant who so much as asked if a customer intended to pay for his purchase with the state’s increasing worthless currency or with gold and silver.

But even such draconian measures couldn’t force people to value a valueless currency. Nor will bureaucratic intrusions prevent people from seeking safety and wealth preservation with gold.

Indeed, gold becomes even more prized and its price moves higher as new measures seek to force people to use a currency of withering value.

If you’re interested in investing in precious metals, let us provide you with a free one-on-one consultation.