Is Gold a Safe Investment During the Evergrande Debt Crisis?

Evergrande clearly illustrates that the world’s $300 trillion of mostly unpayable debt is all balanced only on a tiny tip of real liquidity, which is gold.

“At the end of the day, whether Evergrande pays its bond or not today is just one paragraph in the book of bad debts that are floating around the financial system. The fact the Fed has spent over $4 trillion propping things up since 2020 doesn’t mean this whole mess won’t come crashing down.” — Graham Summers, author of The Everything Bubble

Although nothing much has happened to allay the credit crisis in China, most visible in the insolvency of Evergrande Group, the attention span of the financial press seems to have been exhausted, and accordingly, it has moved on to the next story du jour. This time it’s the U.S. statutory debt ceiling.

There is no doubt that U.S. debt deserves the full attention of Americans seeking to protect their wealth, their families, and their retirements. Coupled with the massive spending measures that proceed apace to drive the debt higher still, we are likely to comment more about it before long too. But because Washington at every turn – lobbyists and contractors, the fixtures of the permanent government, and elected officials of both parties – is utterly dependent on more spending, we assume that the debt ceiling debate will generate more sound and fury than a substantive change in the ruinous trajectory of U.S. debt.

That said, we want to loop back around to Evergrande because it so clearly illustrates the way the world’s $300 trillion of mostly unpayable debt is all balanced on only a tiny tip of real liquidity, which is gold.

The fear of contagion from Everbank’s insolvency is well justified according to economist and fund manager Daniel Lacalle.

In a commentary for the Mises Institute, he writes, “The problem with China is that the entire economy is a huge indebted model that needs almost ten units of debt to generate one unit of GDP [emphasis added], three times more than a decade ago, and all this catastrophe was already more than evident months ago. With total debt of 300% debt to GDP according to the Institute of International Finance, China is not the strong economy swimming in with cash that it was a couple of decades ago. The market assumed that because it is China, the government was going to hide these risks. Even worse, the Evergrande collapse only shows a dangerous reality in several Chinese sectors: excessive indebtedness without real income or assets to support it.”

That diagnosis – excessive indebtedness without the means to support it—can be applied far and wide. 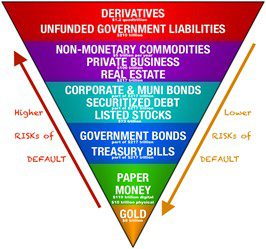 This graph, the Exter’s Pyramid, is an attempt to illustrate the precariousness of today’s metastasizing financialization. It is an inverted pyramid with ever more sketchy debt balancing upon debt upon debt upon… Well, you get the point.

The entire debt superstructure is susceptible to default. Except, that is, for the gold upon which it all rests. Gold is not a promise of future performance. It does not default.

The total notional value or underlying value of global derivatives contracts (at the top of the pyramid) is estimated to be as high as $1 quadrillion. Unfunded liabilities of the U.S. government (also at the top) are estimated at $200 trillion.

Below those are municipal and corporate bonds and stocks, including the shares of “zombie companies.” Those are companies that earn too little to make even interest payments on their debt. They are on life support, dependent on the Fed’s buying down interest rates so they can borrow to stay afloat just a little longer. Today, 20% of listed U.S. companies are in this walking dead category.

So, the problem is not confined to just China and Evergrande.

Keep your eye on the debt ceiling political theater in the days ahead. But remember that its resolution amounts to little more than a green light for more debt, even while the entire global debt edifice wobbles badly.