Inflation’s Surging. Who do You Want in Charge of Your Financial Future?

From made-up and moving inflation targets, to missing inflation’s biggest surge in a generation, to explaining how more spending will finally fix everything, the monetary authorities have quite a track record. We don’t think it's a good idea to let them take care of the dollar and your financial future.

It’s best to be clear-eyed about what the Washington politicians and the money manipulators are doing to the American people, to our currency, and to your financial security.

One after the other, the stacked-up, top-of-the-page stories linked by the Drudge Report the other day capture the moment:

All wage gains taken away…

Farms Completely Out Of Turkeys…

Gold Back in Vogue…

With consumer price inflation of 6.2%, a 31-year high, and producer prices up 8.6% over the past 12 months, it would be strange if people didn’t notice that something is terribly wrong.

But now we are being told that the fading purchasing power of the dollar is for our own good and that all we need to do is let the government spend more money!

Wait a minute! Didn’t deficit spending get us into this mess in the first place?

In 2012 Ben Bernanke, the former Federal Reserve Chairman, announced an explicit policy target of 2% annual inflation. Never mind that the Fed’s statutory mandate is to promote price stability. Never mind as well, that 2% inflation reduces the purchasing power of $50,000 to $30,477 in 25 years. Since capital formation, savings, is the engine of economic growth, it’s probably not good to erode it away. Especially by design.

But the Fed pronounced that 2% inflation is the very definition of price stability.

Then, along came more inflationists. Like addicts wanting another fix, they decided that 2% inflation wasn’t providing the high that it used to. So, they proposed to inflate even more. The Fed’s intellectual justification for 2% inflation was pretty watery intellectual gruel to begin with (“I know of no theoretical justification.” – Paul Volcker), one that couldn’t well respond to the question that if 2% was okay, why not 3%. Or 4?

So having made 2% inflation the holy grail of monetary policy, yet wanting more, under current Fed Chairman Jerome Powell, they announced that they would seek a 2% inflation average “over time,” so inflation could run hotter to make up for times it wasn’t 2%. And if it ran over that, well, maybe it wouldn’t sometime in the future since now we’re talking about averages over time.

Except it isn’t. And it’s nearing double-digit levels.

So, what is the latest out of Washington?

The latest is that it’s for our own good.

This new talking point comes from many quarters. An MSNBC columnist named James Surowiecki is concerned that TV news stories about rising prices are “likely to confuse and frighten viewers rather than enlighten them.”

Another MSNBC figure pronounced it a “dirty little secret” that Americans can afford inflation since they saved money during the lockdowns. Settle down, she explained, “it all needs to be put “in perspective.”  Later she tweeted, “YES- increased prices are hard on people living on fixed incomes. The govt is aware & is cushioning for that. & next yr the Social Security – Supplemental Security Inc benefits will be increased 5.9%.”

Social Security recipients will get a 5.9% cost of living increase. They get it next year, but they have already been paying prices that have risen faster than that for over a year.  It’s an old game. Retirees and people on fixed incomes fall further and further behind every year. Inflation will force income earners into higher and higher tax brackets. Sure, the IRS will adjust those brackets for 2022. But inflation has eaten away at earnings ahead of time, all throughout 2021.

From made-up and moving inflation targets to missing inflation’s biggest surge in a generation, to explaining how more spending will finally fix everything, the monetary authorities have quite a track record. We don’t think it’s a good idea to let them take care of the dollar and your financial future.

That’s why we think you need to protect yourself with gold. 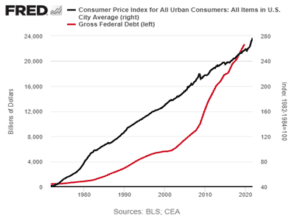 Well, except that that hasn’t worked over the last 50 years. The more deficit spending, the higher prices have climbed, as the accompanying chart shows.

But now they are getting their supernova spending.

That is also why we think you need to protect yourself with gold now.