The Consumer Price Index has rapidly risen in the last year. As the dollar loses purchasing power, Americans feel the squeeze.

Consumer prices nationally for the twelve months ending in March were up a heart-stopping 8.5 percent. In some areas of the country prices have risen 10 percent or more for the year.

Prices rose 1.2 percent just in the month of March; that is an annualized inflation rate of well over 14%

There is something even more frightening that you should see. We’ll get to that in a moment. But first, look at the steep month-after-month acceleration of the Consumer Price Index beginning last summer when the Federal Reserve was insisting that inflation was “transitory.”

If it appears that the Fed has lost control of events, it has only itself to blame. As Nobel prize-winning economist Milton Friedman pointed out long ago, there is a lag between the Fed’s money printing and the time it works its way into rising consumer prices. Some today believe that lag can persist for up to two years. So, if the Fed intended to stop present inflation, it should have done something about the frenzied growth of money and credit long ago.

But it did not do so. Instead, the central bank has grossly misjudged monetary conditions. As we pointed out last week, the Fed is way behind the curve. In the last two years, it has doubled its asset base, creating money out of thin air to buy Treasury and mortgage bonds. For the last six months, the Fed has continued printing unbacked, digital money at a 10 percent annual rate. 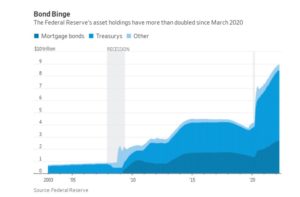 As for the forgotten American workers, their real (after the effects of inflation) average hourly earnings have been falling for a year.

Meanwhile, foreign banks have learned that their dollar holdings can be a prime target of policymakers wielding sanctions and asset seizures.
But there is something still more alarming. If price increases approaching double digits can make entire nations wobbly, imagine the effect of inflation of 20 or 30 percent or more. This is no longer a speculative matter. European producer prices rose 31.4 percent for the 12 months through February. 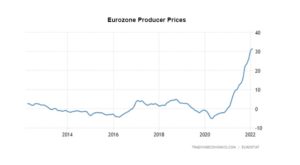 Just imagine what 30+ percent inflation would do to your retirement plans. But where can you go? What can you do? Don’t even think that stocks and bonds represent safety. Here’s what the future holds for both according to President Reagan’s budget director David Stockman:

The bond market is vastly, massively overvalued. As a result, the price of bonds will drop dramatically, and people will be shocked by how much you can lose in allegedly safe sovereign debt.
The stock market is even more dangerous, and it’s entirely because of these artificially low, ultra-low interest rates.

Wealth preservation is crucial in times like these. That doesn’t mean preserving the number of dollars of rapidly declining purchasing power. It means preserving real wealth, not nominal wealth.

That is why people move to the safety of gold.