It is hard to miss rising prices and inflation’s return. Yet many are saying, “There’s nothing to see here.” What should you believe?

In bold, red letters a Drudge Report headline the other day screamed:

Price of Stuff That Makes EVERYTHING Is Surging…

It is hard to miss rising prices and inflation’s return.

Yet the money manipulators are showing up everywhere saying, “There’s nothing to see here.  You people move along!”

Well, who are you going to believe?  Janet Yellen and Jerome Powell?  Or your own eyes?

Drudge linked to a Bloomberg News report: “The prices of raw materials used to make almost everything are skyrocketing, and the upward trajectory looks set to continue as the world economy roars back to life.”

“From steel and copper to corn and lumber, commodities started 2021 with a bang, surging to levels not seen for years. The rally threatens to raise the cost of goods from the lunchtime sandwich to gleaming skyscrapers. It also lit the fuse on the massive reflation trade that’s gripped markets this year and pushed up inflation expectations. With the U.S. economy pumped up on fiscal stimulus, and Europe’s economy starting to reopen as its vaccination rollout gets into gear, there’s little reason to expect a change in direction.” 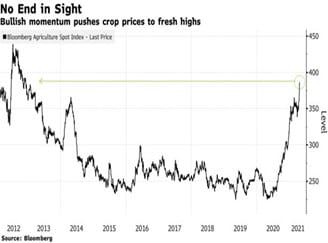 But if Fed chairman Powell is to be believed it is nothing to worry about.  It is just transient.  Temporary.

Powell insists that “an episode of one-time price increases as the economy re-opens is not the same thing as, and is not likely to lead to, persistently higher year-over-year inflation.”

Transitory, says the Fed.   Temporary.  That is the talking point.

But the authorities are clearly concerned that no one is buying it.  They have been all over the news blasting the same talking point.

On NBC’s Meet the Press, Treasury secretary Janet Yellen averred, “I don’t believe inflation will be an issue but if it becomes an issue, we have tools to address it.”

Then there was Cecilia Rouse, chair of the President’s Council of Economic Advisors, on Fox News Sunday who said, “We expect at most transitory inflation.”

That is a talking point.  It may have even been focus-group tested.

Look, prices are rising everywhere.  From chicken to corn to coffee, we could pile on the evidence.

From natural gas to crude oil to gasoline, the evidence is everywhere.

Lumber prices, having tripled over the past 12 months, are driving the price of the average single family home higher.  The National Association of Homebuilders reports that higher lumber prices have caused the price of an average new single-family home to increase by $35,872.

We are once again entering an era of “the incredible shrinking candy bar,” as consumer companies repackage goods in the hopes that consumers won’t notice.  Use of inferior materials and ingredients are other common means of stealth price increases.

Like a few others, we warned that this was coming, the result of the Fed’s reckless explosion of the money supply (see here, here, and here).  After all, the Fed cannot just stovepipe $4 trillion of digitally created made up money into the economy with raising prices.

The Fed’s main talking point may be “transitory,” but that is not the real world’s experience.  Once the inflation genie has been let loose, its hard to get it back in the bottle.  At some point, as people want to get ahead of the game.  As their inflation expectations grow, prices rise even faster than all the money printing justifies.  There is no dial with a “just right” setting.  There is no off switch.

Indeed, the Fed’s history is one of blowing bigger and bigger bubbles and then being shocked when they pop.

So here we go again.  But after a weekend of protests that it is all just transitory, the precious metals market seems to have had enough.  They opened the new week sharply higher.

That is because there is no better defense against inflation’s destruction of currency values than owning gold and silver.  Not precious metal stocks or ETFs.  Real gold and silver.

It is important to understand why. Please contact us at once to learn more.