Increased Inflation is Inevitable. How will the Fed Handle it?

At this point, increased inflation is inevitable, as are missteps by the Fed. Isn't it time you preserved and protected your financial future with gold?

“It is a fact that each major economic and financial crisis has been preceded by ‘excess’ liquidity. Just think of America’s New Era during the 1920s and of Japan’s famous bubble years in the late 1980s.” – Dr. Kurt Richenbacher

During the last major financial crisis, the popping of the housing bubble in 2008, the national debt clock in Manhattan, first installed in 1989, suddenly couldn’t keep up with the times. It was only 13 digits, and that was fine for displaying a $9 trillion debt. But when the national debt reached and rolled right past $10 trillion, arrangements had to be made to update the clock to accommodate 14 digits.

The national debt has tripled since then. It’s now more than $30.4 trillion.

We were reminded about the clock when we noticed that gas pumps in California are being retrofitted to accommodate gasoline prices of $10 a gallon and higher.

We suppose that it’s a convenience for businesses, like gas stations, that can adjust their selling prices with a few keystrokes. During the great German inflation 100 years ago, prices rose so fast that shopkeepers had to close at lunchtime every day to reprice their inventory.

Almost nobody in America – or at least in Washington – appears to care too much about the national debt these days, so this isn’t just about that. But we all care about inflation, so this is an article about the inevitability of more inflation. By implication, it’s about why you need to own gold to preserve your wealth from that inevitability.

We would like to show you why so many observers describe the Federal Reserve as being “painted into a corner” or “between a rock and a hard spot.”

While the nation is focused on inflation rather than the national debt, it is vital to know that they are co-dependent. The federal government, through the treasury department, borrows money to fund this national debt. It does this by selling bonds that bear interest and are redeemable at some date in the future.

When all the smoke clears about the Fed’s promises to get inflation under control, what remains are the interest rates the Treasury must offer to borrow money. Those rates have been extremely low for a long time, but only because the Federal Reserve has been willing to monetize the debt.

It has turned government debt into money, creating excess liquidity that inflates prices throughout the economy. It does this by purchasing government bonds in the afternoon with money that didn’t exist in the morning. With nothing more than digitally printed money, it has purchased the government’s debt instruments and even mortgage bonds. Today, the Fed holds almost 20% of the U.S. debt. 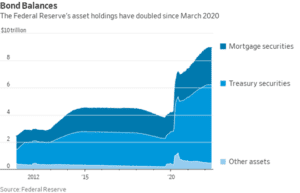 This is so astonishing that it bears restating. Interest rates have been artificially low because of the Fed’s creation of “excess liquidity,” because the Federal Reserve has printed money to buy government bonds.

The following long-term chart, the yield on 10-year U.S. treasuries, shows the impact of this practice on interest rates going back 40 years. Although the U.S. is the biggest debtor in history, it has manipulated interest to some of the lowest rates in history. 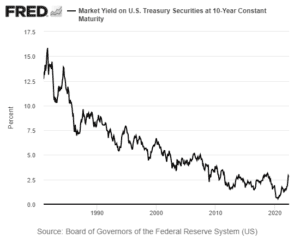 Now, the Fed suggests, it’s going to reign in this sketchy practice. Not necessarily because it wants to, but because the inflation it has produced threatens the U.S. economy, our political system, and even the Federal Reserve itself.

The result of the Fed’s policy pronouncement is already evident in sharply higher interest rates. Here is a close-up of the 10-year yield over the last couple of years. You can see that yields have risen sharply, from about a mere 1/2% all the way up to more than 3% earlier this month. 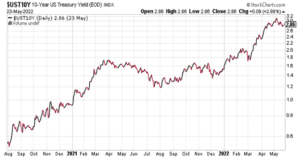 That’s a climb of 2.5%. That increase has already affected mortgage rates and corporate borrowing costs. And as everyone knows, it has let loose a torrent of losses, week after week, on Wall Street.

Higher rates are already slowing the economy. There’s a growing consensus that we’re on the doorstep of a recession. Consumer confidence, an important recession indicator, is down. Retailers like Costco, Amazon, Walmart, and Target have been pounded. Because in a recession, the government’s tax revenue falls while its social spending grows, one must expect the deficit to widen.

Now let’s loop back around to the nexus of debt and inflation. As interest rates rise, one must ask what will happen to the government’s cost of servicing its $30 trillion debt. Each 1% increase in interest rates on its debt portfolio costs $300 billion. Normalization of rates is on track by some estimates to cost a trillion dollars a year in interest.

Especially during a recession, that is a trillion dollars a year the government can only get…

Now that does leave the Fed between a rock and a hard spot!

For wealth preservation, doesn’t it make sense to step out of this dollar and inflation doom loop with a sensible protection plan in gold?