How High Will Gold Go, How Much More Money Printing Will We See in 2022?

Legendary investor Byron Wien predicts gold prices will soar to $2,160 an ounce in 2022 -- a 20% increase. But is his forecast too modest?

Among the first things to greet us in the new year is legendary investor Byron Wien’s forecast that gold will climb 20% to a new record high in 2022, as investors seek safety from hot inflation and a wobbly stock market.

Wien is the Vice Chairman of Blackstone, the investment giant with $730 billion of assets under management.

“Gold reclaims its title as a haven for newly minted billionaires,” predicts Wien. His forecast of a 20% increase means a gold price of $2,160 an ounce.

A review of major elements of the monetary picture suggests to us that Wien’s forecast may prove to be too modest.

That is $1.44 trillion a year in new unbacked dollars, each newly created dollar helping to dilute the purchasing power of dollars already in existence.

These asset purchases are known by the euphemism “quantitative easing,” and are a continuation of Fed money printing policies that began after the bursting of the housing bubble 13 years ago.

Since then, the Fed has created about $7.9 trillion “out of thin air,” as the expression goes. 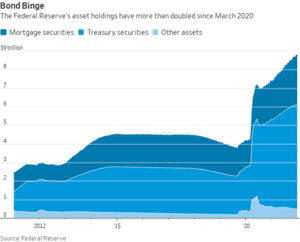 That seems to be the case today.

As the money printing began to leak into higher consumer prices in 2020, people began noticing. They screamed for Washington to do something. Unfortunately, Washington had already done something. In the words of former Reagan budget director David Stockman, since March 2020, Washington created $7 trillion in stimulus spending.

With that, U.S. debt is approaching $30 trillion. That is a lot of money, all of it borrowed. The Fed holds about $5.7 trillion of that U.S. debt.

But wait a minute!

The Fed isn’t a business. It doesn’t produce any goods. It doesn’t manufacture and sell producer or consumer goods, or till the soil and harvest crops to earn a profit. It doesn’t build any houses or repair any cars. Where did the Fed get the money to loan the Treasury $5.7 trillion? Where did it get $2.6 trillion to buy mortgage-backed securities?

You know the answer: It printed the money. Digitally, of course. Printing on paper is so yesterday.

Now the outcry against higher gas and grocery prices has put a spotlight on the Fed. With price inflation at levels not seen in 40 years, the chagrined Fed announced in November that it would slow down – taper – the rate at which it purchases assets with made-up digital money.

We shall see. So far, each new year brings another crisis that demands more money printing. As Doug Noland writes in Credit Bubble Bulletin, “The Federal Reserve is now 13 years into a failed QE experiment. As history teaches, once monetary inflation is unleashed it becomes extremely difficult to rein in. ‘Just one more year of money printing – only one more crisis or downturn to overcome.’ It just doesn’t stop.”

Meanwhile, the Fed has become an enabler of the Treasury, which is now dependent on the Fed to buy its debt. And as for the debt, in the middle of December, Washington raised the nation’s debt ceiling another $2.5 trillion.

When the dust settles, Brian Wien’s gold forecast could prove to be far too low.