As the Russia-Ukraine conflict has shown, gold is the go-to currency during a time of crisis. It remains the most viable option for investors seeking wealth preservation for their family and their retirement during an inflationary age as well.

Warfare always means the destruction of both life and wealth. It leaves the living poorer.

In wartime, opinions are divided about what the outcome will be. Napoleon believed he would be victorious in Russia. Had he foreseen failure, he would not have chased the retreating Russians to Moscow. The Japanese thought Pearl Harbor would lead to their ultimate success. Bush administration officials thought the Iraq War would be “a cakewalk.” Afghanistan has shattered the pretensions of more than one invading empire, including our own.

It appears that President Vladimir Putin thought Ukraine would fall into Russian hands in two or three days. He was wrong.

Opinions are divided about the outcome of economic warfare as well, but sanctions do not have a sterling record of success.

Sanctions on Japan were not supposed to lead to Pearl Harbor. Sanctions on Saddam Hussein after the Gulf War had the perverse effect of making him stronger. The government became the provider of food for most of the Iraqi people; they became more, not less, dependent on Saddam’s regime. Decades of the American embargo on Cuba spread poverty for the people, but Fidel Castro never missed a meal.

Years of sanctions on Russia were supposed to keep Putin from doing what he did. They did not.

Spreading and cascading sanctions are going to have a far greater impact on the world than Russia’s small share of its economy – about 3% – would suggest. Higher oil prices are already being felt far and wide, and now crude has moved well above $100. The behavior of the US 10-year Treasury bond suggests that the Federal Reserve may have cranked up the printing press. Two weeks ago, its yield moved above 2.00%; it has fallen to 1.70%. We do not know who is buying bonds and moving rates lower knowing that the Fed has committed to raising rates soon, but historically, governments print a lot of money to make up for the costs of war and skyrocketing energy prices.

All this is happening at the worst possible time. Commodity prices were already racing higher before the war in Ukraine. The widely followed CRB Index of commodity prices is up 16% since the first of the year. 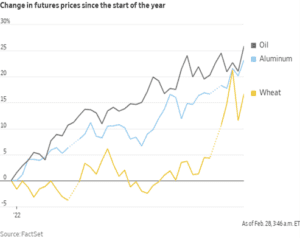 A commodity-based or natural resource economy like Russia can push back on Western sanctions. Much has been said about Russian energy exports—petroleum and coal—that are vital to European economies, but Russia is also the world’s leading producer of fertilizers, an important provider of lumber and grain, as well as of indispensable strategic metals: titanium, palladium, aluminum, and nickel. Yes, Russia would suffer if it cut off exports of these goods in response to Western sanctions, but remember that Russia is the country that burned its own cities to keep them from invaders.

Sanctions represent the weaponization of the dollar. But today, the U.S. is no longer the global hegemon that it was when the dollar became the world’s reserve currency. So, predictably, dollar dominance in that role is slipping. That means two things: increased global demand for gold as an alternative to the decaying dollar, and higher dollar gold prices because of the dollar’s declining purchasing power.

Focus for a moment, too, on economic crisis conditions. Imagine a Ukrainian family seeking to survive or escape this war. No one, no matter how nationalistic or patriotic, would prefer the Ukrainian hryvnia to gold.

These are a few of the reasons that gold is moving quickly to overtake its previous high set in August 2000.

Gold is the go-to currency in a crisis. It remains the most viable option for central banks seeking to diversify from a weaponized dollar. It is still the best choice for an individual investor who wants to keep his money safe for his family and for his retirement in an inflationary time.

Now is your chance. Let us provide you with a free one-on-one consultation to help you protect your retirement.