The dark side of good earnings: Companies are talking about turning “furloughs” into permanent layoffs. You knew this was coming. It’s been a very strange earnings season. “We’ve been looking for a pullback in the gold market. Nothing goes straight up forever. We had a very strong run, well over $2,000 an ounce, so we were expecting to see some consolidation in the markets and I think that’s what we’re seeing today,” Foster told Kitco News.

Interest rates remain the fundamental long-term driver for a bullish gold story, according to Foster.

“You begin with interest rates. Real interest rates are negative. They turned negative last year when the Fed started cutting rates. If you look historically, that doesn’t happen very often. Real rates were negative after the financial crisis, and you have to go all the way back to the 1970s in that inflationary cycle to find negative real interest rates. The Fed has told us that it’s not interested in raising rates any time soon, so I think we’re going to be in a negative real rate environment for the foreseeable future and that’s a very good backdrop for gold,” Foster said.

Geopolitical risks, a weaker dollar and the increase of global debt are also tailwinds for gold, Foster noted.

“We could be seeing the beginnings of a bear market for the dollar, and that’s another bullish development for gold,” he said.

VanEck’s $3,400 an ounce price forecast is based on historical deflationary price cycles. We know a lot about her economic policies from the presidential primaries, during which she clearly aligned herself with the Democratic Party’s far-left “democratic socialist” wing. Given that she was once California’s attorney general and is now one serving as one of its senators, that’s not a huge surprise. California has hewn to the progressive economic line for decades.

But her understanding of how the economy works is questionable, to say the least. For example, she dismissed the strength of the pre-pandemic labor market – which was the strongest in modern times, and maybe ever — stating, “Well, yeah, people in America are working. They’re working two and three jobs.” The unemployment rate was hitting 50-year lows prior to the pandemic because President Trump implemented pro-growth policies that incentivized private-sector job growth — not because people were working multiple jobs.

To make matters worse, Biden has recently teamed up with a self-proclaimed “democratic socialist” Bernie Sanders, embracing a “unity” policy platform with some of the most radical economic reforms in our country’s history. 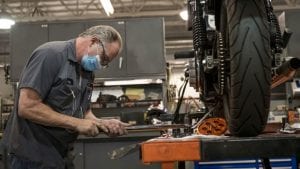 The dark side of good earnings: Companies are talking about turning “furloughs” into permanent layoffs.

You knew this was coming. It’s been a very strange earnings season.  Analysts dramatically underestimated earnings for a good part of the market, particularly industrials, financials, and many technology stocks.

The average company beat analyst estimates by 22% — way above the historic norm of a 3% beat.  But top-line revenue beat by only 1%. The huge disparity between top-line and bottom-line can be explained simply. Companies have gone on a dramatic cost-cutting initiative, far in excess of analyst expectations, that have significantly boosted bottom-line returns.

The good news is if and when the economy recovers and revenue growth returns, corporate profits will be even stronger. The bad news is a lot of people are going to get laid off.

Unfortunately, these permanent cost cutting initiatives are only going to widen the disconnect between Wall Street and Main Street — the belief that the stock market is either disconnected from reality or that it is a quiet cheerleader for layoffs because it will boost the corporate bottom line.