There are many issues threatening to usher in a currency crisis and propel gold to new heights. Let's take a look at them, their impact on our monetary system, and the importance of gold in the escalating crisis.

Are we nearing a financial crisis?

Consider the big stories, the ones that dominate the global and financial news:

Generally, we drill down each week into one story that affects gold. Last week, it was the global de-dollarization movement. The week before, we discussed the prospects of an inflationary depression.

Because there are so many things happening all at once that threaten to usher in a currency crisis and propel gold to new heights, this week, we want to take a 30,000-foot view of the big stories singled out above, a high altitude fly-over to view each, its impact on our monetary system, and the importance of gold in the escalating crisis.

Polls show Americans are apprehensive about both getting drawn into the war in Ukraine and all the loose talk about the use of nuclear weapons. An NBC News poll finds that 8 of 10 Americans are afraid that the crisis could rise to involve nuclear arms.

Without venturing into a prospect too horrifying to contemplate, let us simply ask this question about financial conditions in times of war. If you were a Ukrainian trying to get your family out of the country, or just trying to survive, what would you rather have: Ukraine’s increasingly worthless paper currency, the hryvnia, or gold? The same could be asked of Russians, the ruble, which has tanked, or gold?

President Joe Biden said that food shortages are coming, a consequence of the Ukraine war.

“It’s going to be real,” Biden said at a news conference in Brussels.

French President Emmanuel Macron joined in, warning of “an unprecedented food crisis,” one that could get much worse over the next year or year and a half.

“The war in Ukraine makes it impossible to sow [seeds] as much is needed and is creating a situation that will be even worse in 12–18 months,” said Macron.

Russia and Ukraine are Europe’s “breadbasket,” producing 30% of global wheat exports. They also account for substantial corn and barley exports.

But there is more to the picture than just their food exports. Russia also produces 15% of the world’s fertilizer, essential for the crop yields upon which a hungry world depends. The US Department of Agriculture reported in the Federal Register, “In 2021, for instance, the prices U.S. farmers paid for fertilizers increased over 60 percent. Nitrogen fertilizer prices increased 95 percent, and potash fertilizers increased over 70 percent. A recent study finds that feed grain farms in 2022 could face an increase of cost of $128,000 per farm due to higher fertilizer cost[s].”

Los Angeles is experiencing all-time high gas prices. While trying to downplay the seriousness of gas prices, Treasury Secretary Janet Yellen had to admit that “it is conceivable that they might move higher.”

Those who were around in the early 1970s will remember the recession-inducing oil shocks of the times. OPEC oil producers warned repeatedly that a change in the value of the dollar would result in higher nominal oil prices, so when then-President Richard Nixon suspended dollar convertibility to gold in 1971, oil prices were bound to climb. They quadrupled from $3 per barrel in 1972 to $12 in 1974. They spiked again beginning in the late 1970s until they hit $35 in 1981. Gas lines and rationing were among the consequences. Of course, the gold price skyrocketed.

Once again today, high inflation is among the drivers of higher energy prices. As you can see from the chart below, the climb in crude oil prices predates Russia’s invasion of Ukraine. It’s only reasonable for producers to wonder why they should exchange their appreciating energy resources for depreciating digital and paper money. Gold figures large in alternative energy pricing structures already under discussion. 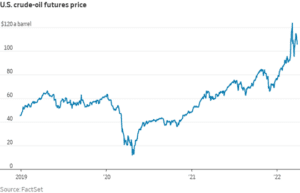 According to Moscow-based reporter Dimitri Simes, Jr., Russia is experiencing “a wave of panic buying in major cities across the country, with shoppers seeking to stock up on essentials ranging from basic food products to medicines.” The same thing could happen here if Russia shuts down exports of vital resources, including oil, natural gas, and grains.

What is the impact of sanctions on gold? Brien Lundin, the organizer of the respected New Orleans Investment Conference, wrote, “The result of sanctions against Russian gold reserves would be to alert the 36 countries that hold significant portions of their gold reserves in the vaults of the Federal Reserve Bank of New York that they should take their gold back as soon as possible.”

Americans are already struggling with inflation. Economist Mohamed El-Erian said, “We are looking at a cost-of-living crisis.” The Fed, as he has said repeatedly, is behind the curve and will push the economy into recession as it tries to normalize interest rates.

The World Bank reported that as many as a dozen third-world countries face defaulting on their foreign debt due to skyrocketing commodity prices. According to a Wall Street Journal account, the debtors were on shaky ground even before the invasion of Ukraine.

“The pandemic had pushed up total indebtedness of the countries to a 50-year high, or the equivalent of more than 2.5 times government revenues.”

Such defaults threaten to cascade across the world in unforeseeable ways, with serious consequences for foreign banks and lenders.

Meanwhile, in the US, President Biden has now presented his Fiscal Year 2023 budget. It’s a $5.8 trillion behemoth that includes $813 billion in military spending, a 4% increase over 2022, and is larger than the next 11 countries combined.

Most shocking in the Biden plan is a provision that would require some taxpayers to pay taxes on unrealized capital gains. Think of that as a tax on the growing equity in your home, one that could force you to sell your home or borrow against your equity to meet the tax demand. This is a fundamental change in America’s economic tenets and could force the affected to dispose of assets against their will to meet tax obligations. It signals that capital, which is already under attack on other fronts, is not as welcome in the US as it has been.

Gold is capital on strike. When capital is no longer safe, people turn to the privacy and security of gold. 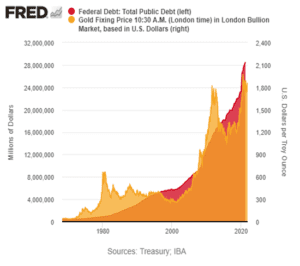 This is a megatrend that must be watched. Former White House budget director David Stockman sums up what this will mean: “Combining digital currencies with digital IDs while phasing out, or even banning, the use of cash would grant governments and central banks the ability not only to track every purchase we make but also to determine what we can and cannot spend our money.”

Moves of this sort, surveillance designed to control, authoritarian by design, will meet fierce pushback and add to the rush to gold.

Together, these fundamentals make a compelling case for gold ownership. While we can’t know the exact day and hour that gold will break out next, these accumulating dynamics promise a powerful move higher.

We advise taking advantage of any dip in prices as a gift, allowing you to add to your holdings before the crisis.