Fed Has 2 Roads in Monetary Woods: More Money Printing or Tank the Economy

Let’s blame inflation on a malfunctioning supply chain, said Washington. And never mind the Federal Reserve’s astonishing money printing: The $4.25 trillion it made up out of thin air, virtually doubling its assets in just 19 months.

You will note (on the left of the following chart) that the Fed did the same thing in the fall of 2008, more than doubling its assets by digitally printing dollars. Note as well the explosion in gold prices that soon followed.

This time when the Fed cranked up the printing presses again two years ago (seen on the right of the chart), gold wasted no time, rocketing once again to a new all-time high in August last year.

Since then, the made-up money printing has continued at the slower, but still aggressive, rate of $120 billion a month.

And the price of gold has been trading mostly sideways, consolidating in a narrow trading range. As someone wise once noted, the longer the consolidation, the bigger the eventual breakout. 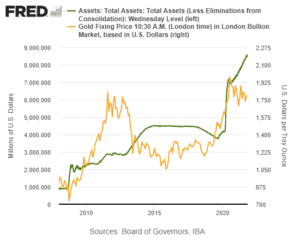 We point to this recent Fed monetary manipulation, not to diminish the part that the supply chain plays in our troubled economy today. We take the disruptions of supply chains very seriously, not just for the shortages they entail, but for the role they play in compounding price increases.

Providing incomes to people for not working to “stimulate” the economy (how well has that worked?), subsidizing incomes with freshly printed dollars, shutting down mostly small businesses – the backbone of American employment – for prolonged periods, and forbidding millions of people from working for reasons wise or foolish, must exact a toll on productivity.

It’s like putting a wrecking crew to work busting up the supply chain. Rising labor costs, worker absenteeism and rebellions, material and parts shortages leading to additional shutdowns that extend the disruptions – all will show up in higher prices for finished products and in the CPI for a long time to come. Indeed, supply issues are one of the reasons that Bank of America expects crude oil will climb to $120 next year.

At the same time, there is the lesson we learned long ago from Nobel-prize winner Milton Friedman: There is a lag between the Fed’s money printing and that time it works its way into rising consumer prices.

The Fed has painted itself into a corner. Now with inflation evident to all, can it really rein in liquidity? Will it usher in meaningfully higher interest rates and let the economy crash even as supply chain interruptions are already costing jobs and crushing prosperity?

Asked differently, will it taper its money printing with the nation’s productivity already shrinking (GDP fell to 2% annually in the third quarter)?

Or will it just talk a good game…about what it will do by and by?

For if it raises rates meaningfully to slow inflation, it will mean that Wall Street and the money center banks have lost their clout with the monetary authorities.

This institutional preference has been apparent all year. As inflation climbed, the Fed persisted in its money printing. It chose more inflation. The Fed and its constituents prefer to let the currency fall. This is what central banks believe is the easier path. Traditionally politicians and central bankers have been able to blame a falling currency on exogenous forces. It was all the fault of “the gnomes of Zurich,” they said during a prior episode of currency destruction. Another scapegoat was “international currency speculators.”

The Fed may talk tapering even as it finds a more convoluted mechanism to keep pumping liquidity. But QE by another name is still money printing.

Devaluation is the common fate of unbacked currencies, whether printed on fine linen stock or printed digitally with a few keystrokes.

Now that this fate is playing out once again, do not delay. Be sure you have protected yourself, your family, and your retirement with gold.