Evergrande Debt Crisis: Has the Everything Bubble Found Its Pin?

All eyes are on the Evergrande debt crisis. We do not know if it is the next Creditanstalt or Lehman, but experts say it is a good candidate.

The world is awash in debt. Global debt – government, household, corporate, and bank debt – is now closing in on $300 trillion. The Institute of International Finance’s latest Global Debt Monitor states that the debt mountain grew by $4.8 trillion in the second quarter alone, reaching $296 trillion at the end of June.

Along the way, all that debt has financed bubbles in stocks and bubbles in bonds that, like all bubbles, will pop with devastating effects when a pin happens along. Now that pin – or at least a good candidate for a sudden event that can topple the dominos of excessive debt – has shown up.

But first, just a world about the pins that have popped prior bubbles.

The first major bank collapse of what became the Great Depression, the one that set off the chain reaction was Austria’s Creditanstalt. The conventional wisdom had it that Creditanstalt, founded by the Rothschild financiering family, was indestructible. But clearly seeing its unsustainable overextension, the great economist Ludwig von Mises refused several offers of executive positions with the bank.

When it collapsed in 1931, a global panic was triggered. A wave of bankruptcies and unemployment followed. In 1933, President Roosevelt sharply devalued the U.S. dollar by rocketing the gold price up from $20.67 an ounce to $35 an ounce – a gain of almost 70%.

In 2008, the collapse of U.S. investment banks Bear Stearns and Lehman Brothers burst the mortgage bubble, ushering in the Great Recession.

Having lost billions of dollars and forced the fire sale of billions more of assets, Lehman Brothers filed for bankruptcy on September 15, 2008. It is in episodes like this, when bubbles pop, that gold shines brightest. People flee paper investments and all the counterparty risks they involve. They seek to protect their assets with the enduring money of the ages.

Here is a gold price chart of the period: 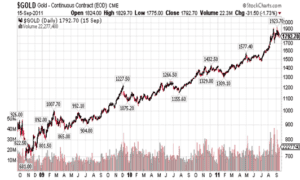 It shows gold’s powerful climb from its October 2008 low of $681 an ounce as the damage to the economy spread, to its interim high less than three years later of $1,923.70.

Now, the apparent popping of another credit bubble, this one in China, has the potential to initiate a cascading series of defaults with grim worldwide consequences. Yes, we’re referring to the Evergrande debt crisis.

Like Creditanstalt and Lehman Brothers before it, Evergrande Group, an enormous and highly leveraged Chinese real estate developer, is wobbling badly.

Doug Noland from Credit Bubble Bulletin writes, “Evergrande epitomizes China’s historic Credit Bubble. It has borrowed and spent lavishly, in what history will surely view as a company that operated at the epicenter of an extraordinary Bubble of asset inflation, speculation and reckless debt-financed mal-investment.”

Evergrande’s bonds are in free-fall. 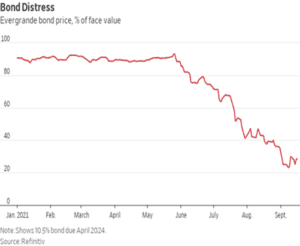 Here is Noland’s succinct description of the crisis:

“Evergrande owes over $300 billion – to banks and non-bank financial institutions, domestic and international bond holders, suppliers and apartment buyers. It has bank borrowings of $90 billion, including from Agricultural Bank of China, China Minsheng Banking Corp and China CITIC Bank Corp (reports have 128 banks with exposure). Thousands of suppliers are on the hook for $100 billion.

It appears an Evergrande debt restructuring is inevitable. From a few decades of close observation, these types of situations generally prove worse than even the more bearish analysts fear. Assume ugly and messy. The presumption all along – by bankers, investors and apartment purchasers – was that Beijing would never allow the collapse of such a huge player. This fundamental market perception is in serious jeopardy.”

We do not know if Evergrande is the next Creditanstalt or Lehman, but it is a good candidate.

The current “everything bubble,” fueled by the unprecedented creation of artificial credit and currency by the world’s central banks, will meet the fate of all such bubbles.

If Evergrande is not the pin, another will be along soon. It is only prudent to protect yourself with gold. But you must do so now before the bubble pops.

Take the first step by calling us for a no-obligation, free one-on-one consultation.