Prices have been rising fast, and President Joe Biden has warned that they're going to get worse.

When things are going along fine, nobody gives much thought to what makes printed pieces of paper with green ink and fancy scrollwork or bookkeeping entries with dollar signs valued as money.

It’s the same with eggs and milk. When things are going along fine, nobody thinks too much about the whole messy business of the farm in the background. They think eggs and milk come from the grocery store.

It’s only when things aren’t going along fine that people begin to look more closely. And things haven’t been going along fine on the food front. Prices have been rising fast, and President Joe Biden has warned that they’re going to get worse.

“It’s going to get real,” is his appraisal. We take him at his word.

Things are not going along fine on the money front either. Last year, at this time, the Federal Reserve and the Washington authorities kept insisting that inflation was not really a cause for concern.

That was not a realistic appraisal.

So, let’s look behind the curtain at inflation’s trajectory.

We currently have the highest price inflation in 40 years, over 10% in some places.

We also have all of the ingredients for even higher inflation. President Biden’s new budget proposal is the biggest in history, a 5.8 trillion dollar affair.

Sanctions on Russia are already driving prices higher as well, and Biden is seeking to add to them. However, even before Russia invaded Ukraine, gas was up 40% and oil was up 80%.

Ron Paul, the former congressman, presidential candidate, and gold authority, said this about the consequences of America’s intervention in the Ukraine-Russian conflict: “[It] has caused more countries to seek alternatives to the dollar. This increases pressure for the dollar to lose its world reserve currency status. When that happens, the US will face a major economic crisis featuring hyperinflation, massive unemployment, and the growth of authoritarian political movements.“

Perhaps most shocking of all is that, despite what Fed Chairman Jerome Powell has said about tackling inflation, the Federal Reserve continues to print more money. You can see this money explosion in the following chart.

Note on the right side of the chart that since November, when the Fed finally pledged to reign in its money printing, Fed assets – its purchases of financial assets with digitally-printed, made-up money – have continued to grow at a 10% annual rate. 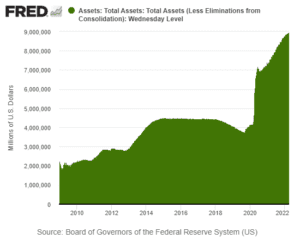 Printing a lot more money like that is a strange way of getting serious about inflation. The impact on food prices is apparent to everyone in the grocery store and in the following chart: 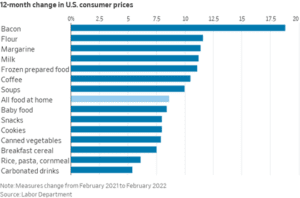 American consumers are mostly a captive market. They get paid in dollars. They have purchase contracts for homes and cars, and credit card debt denominated in dollars. They pay taxes in dollars. To the extent that they fail to diversify their dollars in gold, they are the targeted victims of the Fed’s monetary malfeasance.

But the rest of the world isn’t held captive in the same way. Imagine how the collapsing dollar is viewed elsewhere. China and Japan both hold more than a trillion dollars in US government dollar-denominated bonds.

Biden inflation means that each have lost more than a hundred billion dollars of purchasing power in the last year.

Both those governments know exactly what’s happening since they are money printers themselves. They don’t mind fleecing their own people with their own unbacked money. But they don’t want to be fleeced by us.

And you shouldn’t put up with it either.

Do what central banks around the world are doing, exchanging their failing dollars for gold.