Does the Fed Care More About Wall Street or the American People?

A recent Frontline special focused on quantitative easing (QE), the Fed’s massive money-printing, bond-buying operation that began with the mortgage meltdown in 2008 and continues to this day.

The PBS documentary series Frontline took a close look at the Federal Reserve this month.

“The Power of the Fed” focused on quantitative easing (QE), the Fed’s massive money-printing, bond-buying operation that began with the mortgage meltdown in 2008 and continues to this day.

The program’s thesis is indisputable: Fed policy has stovepiped enormous resources — money measured in the trillions — to Wall Street and the money center banks, concentrating wealth in the hands of the wealthiest Americans. If the country appears unstable, it is because this exaggerated polarization of wealth is social dynamite.

Frontline interviewed Andrew Huszar, a former Fed official who was tasked in 2009 with managing the Fed’s QE bond-buying spree. After a few years, Huszar resigned and told his story to the Wall Street Journal.

It was, says Huszar, the greatest backdoor Wall Street bailout of all time.

“I realized the Fed had lost any remaining ability to think independently from Wall Street,” said Huszar. “Demoralized, I returned to the private sector.”

QE has been an extraordinary and unprecedented episode, having printed more than $7.2 trillion of unbacked U.S. dollars since it began, as seen on the following chart. 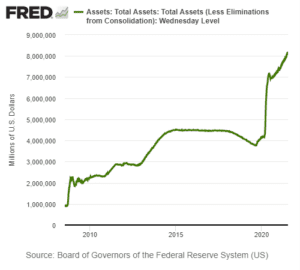 Frontline wondered what Huszar has to say today, as QE continues in 2021. He says he finds it demoralizing.

“Nobody was giving a coherent explanation as to how the Fed showering trillions of dollars onto Wall Street banks was actually directly benefiting the average American. And I’ll tell you why they weren’t talking about it…because it doesn’t.”

As recently as February, Fed chairman Jerome Powell told a Senate committee that all this made-up liquidity “is not a problem for this time as near as I can figure.” He went so far as to tell one senator concerned about the inflationary environment that money growth “does not really have important implications. It is something we have to unlearn I guess.”

That was five months ago. Despite Fed assurances that inflation would not be a problem, it has become a problem in record time and a substantial problem at that. Year-over-year consumer prices have risen 5.4%, producer prices 7.4%, and import prices 11.2%.

In May, the Case-Schiller Home Price Index showed a 15% increase from the year before. Confronted with these facts, Powell explained in a return visit to the Senate committee this month that the Fed is “uncomfortable” with inflation heating up month after month, and that the Fed doesn’t “understand” it.

Investment legend Jeremy Grantham understands it. Wikipedia states that “Grantham has built much of his investing reputation over his long career by claiming to identify speculative market ‘bubbles’ as they were unfolding.”

Because all those Fed trillions have to go somewhere, Grantham explained during the special that now the Fed has created bubbles in stocks, bonds, and housing all at the same time!

“They will not be able to prevent, sooner or later, the asset prices coming back down, so we are playing with fire.”

If there was ever a time to turn to the safety of gold and silver, this moment – with the Fed having stretched monetary policy beyond belief, with officials reeling in confusion over the inflation they did not foresee and do not understand, and with the American people divided in a way not seen in a century, is such a time.

Give us a call for your free one-on-one consultation.