We all should be watching two events that could trigger the next worldwide crisis and potentially propel gold prices: proliferating governmental instability and food issues.

Markets are widely thought to be able to reflect or discount future events. It is not that they function like some sort of “psychic hotline.” Instead, they assimilate in one place and reflect in prices all the available information about present and future events.

The gold market can certainly be said to have performed this function admirably. Two years ago, while Federal Reserve officials were talking incessantly about trying to get the inflation rate up to its arbitrary target of 2 percent, the gold market looked at the furious money printing and climbed to an all-time high of $2,089.

It was a prescient move. Consumer price inflation soon slipped loose and has been marching higher ever since, last reported surging to 9.1% for the 12 months ending in June.  Wholesale prices show even more inflation headed toward consumers, as the Producer Price Index roared ahead 11.3%. 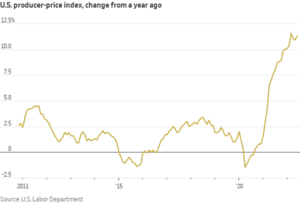 We note that gold made another assault on its all-time high as recently as March. But as we have been clear, the selling of “paper gold,” gold proxies and derivatives of unknown provenance by speculators and Wall Street operators desperate for liquidity as their stock, bond, and crypto-currency portfolios crashed, has pushed gold lower, even in the face of reports of strong demand for real, physical gold.

Besides the buying opportunity this presents, is there something to be discerned in this movement in the gold price? It is fair to say that it is telling us that the U.S., and presumably much of the rest of the world, is moving headlong into what could be a steep recession. If so, the Fed is behind the curve once again, as it raises interest rates headed into the downturn.

Like watching a train wreck, the Fed’s uncannily poor timing and the march of the inflation numbers higher and higher have had a mesmerizing effect, and we have spent most of our attention on them in these commentaries. But this week we thought it would be useful to share some bullet points about two fundamental events that can trigger the next worldwide crisis. Proliferating governmental instability and food issues should be on your watch list due to their potential to propel gold’s next move up.

Governments In Trouble Far and Wide

Some highlights. In the U.S., public trust in the government to “do what is right” all or most of the time is down to 21%, according to a Pew survey. That is a remarkable collapse: two generations ago, three-quarters of the people trusted the government. Meanwhile, President Joe Biden’s economic approval ratings have fallen five points since April to 30%. The Atlantic called its analysis of the American divide, “The Doom Spiral of Pernicious Polarization.”

But it is not just us. We are seeing a global megatrend with governments wobbling far and wide. Italian prime minister Mario Draghi suddenly resigned, with food and energy prices at the center of the turmoil in Italy. British Prime Minister Boris Johnson also resigned suddenly over issues having to do with public trust. French President Emmanuel Macron’s alliance in France’s parliament has fallen apart. With his parliamentary majority defeated, the left and the right have joined together to hand him a major defeat on a vaccine mandate.

Citizens of Sri Lanka ransacked their presidential palace as their president fled the country. It turns out to nobody’s surprise that central economic planning creates poverty, leaving the people suffering from energy and food shortages.

Agricultural crises are not limited to Sri Lanka. Or to Asia. Panamanians have taken to the streets, put up barricades, and shut down highways to protest the high cost of food and fuel.

A top-down mandate on nitrogen fertilizer usage has sparked protests in the Netherlands. The Netherlands may be small, but it is one of the world’s top 10 food exporters. Farmers there expect government policies to mean sharp reductions in crops and livestock. German farmers are joining the protests at their border with the Dutch. Farmers in Poland, Italy, Spain, and Canada who are suffering from similar policies are demonstrating their solidarity.

Satellite surveillance shows sub-par food crops just about everywhere except in Russia, China, and Canada. Wheat harvest forecasts are below their five-year average in Germany, France, the U.S., India, and Ukraine. 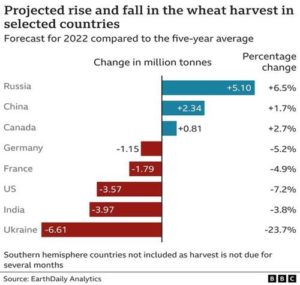 There are other issues that don’t fit into these two categories but deserve to be monitored for their potential to trigger the next big gold surge. Seasoned geopolitical observers are starting to ask if a United States-Russia war is inevitable. A proxy war between the two nuclear powerhouses is clearly under way. Pat Buchanan, a senior advisor to three presidents, writes, “Americans appear dismissive of dark Russian warnings that rather than accept defeat in Ukraine, the humiliation of their nation, and their encirclement and isolation, they will resort to tactical nuclear weapons.”

How things escalate remains to be seen, but one must not miss that as Washington directs more and more resources to Ukraine, it does so at the expense of the domestic economy.

One other note, also characteristic of wartime economies. China, one of the U.S. government’s largest creditors, has been reducing its holding of U.S. debt for six straight months. Its holdings have now fallen below $1 trillion. This is a high-alert development. It comes as the Federal Reserve has promised to reduce its own holdings of Treasury and mortgage debt. But since the debt itself isn’t being reduced, someone, somewhere, will have to step in to fund it, to buy the debt that China is dumping and that the Fed intends to unload.

No matter what the Fed promises, it will print money to buy government debt if it must.

RELATED: Will Central Banks Switch From the U.S. Dollar to the Chinese Yuan?

We don’t wish more trouble on the world and have long urged economic and monetary responsibility. But gold is the first beneficiary of geopolitical turmoil and hair-trigger issues: governmental instability, challenges to food and energy, both staples of modern life, and even war itself.

If you’d like to invest, let us provide you with a free one-on-one consultation.