The similarities between the financial chaos then and now are so uncannily similar that we are starting to think that Mark Twain had it right when he said that even if history doesn’t repeat, it does rhyme.

“The likelihood that there’s going to be the Taliban overrunning everything and owning the whole country is highly unlikely….There’s going to be no circumstance where you see people being lifted off the roof of an embassy in the — of the United States from Afghanistan.” — President Biden, 2021

“The rate of increase of inflation is decreasing” — President Nixon, 1972

“Our experts believe and the data shows that most of the price increases we’ve seen are — were expected and expected to be temporary.” — President Biden, 2021

We have never believed that history exactly repeats itself. But watching the helicopters evacuating Americans in Kabul as the Taliban waltzed in looks an awful lot like watching choppers lift off the roof of the U.S. embassy in Saigon in 1975.

The similarities between the financial chaos then and now are so uncannily similar that we are beginning to think that Mark Twain had it right when he said that even if history doesn’t repeat, it does rhyme.

President Johnson’s “guns and butter spending” was positively Biden-like. It let loose inflation in the mid-1960s and it continued under Nixon. The money supply exploded throughout the 1970s. Price inflation was a double-digit nightmare for consumers. The stock market, like today’s market, kept aloft by Fed liquidity, ultimately fell by half that decade. Gold, as always, was the safe haven from the collapsing purchasing power of the dollar.

It is not a pleasant thing to see people in a state of panic as we saw on the tarmac in Kabul. But with Afghanistan’s reputation as the graveyard of empire validated once again, shouldn’t fiat money be remembered as the ruination of countries and the graveyard of currencies?

It forces us to confront an unpleasant question: What if the ineptitude that has governed so much of our foreign policy is matched by a similar cluelessness in our monetary affairs? It is not an impertinent question. Just as one foreign policy blunder has followed another in the new millennium, we have suffered the popping of one financial bubble after another.
Stated differently, what if the fragility we see in U.S. foreign policy presumptions is matched by an equivalent instability in our financial presumptions?

That was certainly the case in the 1970s. Besides people grabbing for the struts of helicopters lifting off the roof of the U.S. embassy, the monetary authorities were whirling from one policy misadventure to the next. To note just one example, the Federal Reserve betrayed its hysteria by changing interest rates during the decade as though possessed by demons: 22 times in 1973 alone, and 23 times in 1978.

Are we now on the verge of panic again? Let us show you money supply graphs then and now.

Below is M2 in the 1970s. It is a measure of money supply that includes cash, demand deposits (checking accounts), traveler’s checks, savings deposits, and money market funds. As the money supply rose it eventually and inevitably pulled gold along with it. 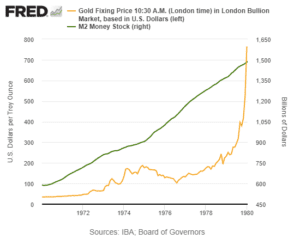 Below is M2 since the beginning of 2020. (We note without comment that the green line ends abruptly on this chart; the Fed ceased reporting M1 and M2 earlier this year.) U.S. debt has risen by an astonishing $5 trillion in the period covered here, and because the Fed is funding most new U.S. debt with “money printing,” it should be no surprise that the money supply has jumped sharply. It will no doubt pull gold along with it. 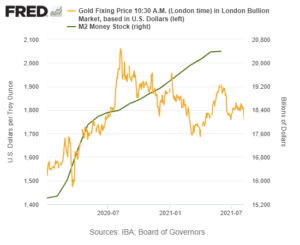 As for panic, we will turn to currency expert and bestselling author Jim Rickards. Yes, he says, “We may be in the early stages of a financial panic.” “Such panics can unfold slowly and out of the view of the mainstream media for a year or more before they burst into view,” writes Rickards at The Daily Reckoning. “The Russia-LTCM panic of September 1998 started in Thailand in June 1997. The collapse of Lehman Brothers and AIG in September 2008 started with mortgage delinquencies in late 2006 and early 2007. It took a year for both panics to erupt. Only professionals and experts see the signs. Most investors realize there’s a panic when it’s already too late to protect themselves. If a new liquidity crisis is underway (and there are signs that this is the case), then we should not be surprised to see it turn into a full-scale panic and possible market collapse late this year.”

No one wants to be left on the tarmac when the financial panic hits. But that is the fate of those who wait until it’s too late.

Consult with us today about protecting yourself from blunders and bubbles with gold, money that endures through the ages. Give us a call for your free one-on-one consultation.