Confidence in Fed’s Ability is Cracking. Protect Your Retirement Now!

With inflation at 40-year highs and stagflation appearing on our doorstep, more people are starting to lose faith in the Fed. They're also starting to question the safety of their retirement.

The American people are not too happy with the institutions of government.

The latest NBC poll has President Joe Biden’s job approval rating at a new low of just 39%. Even Jeff Bezos, one of the world’s richest men, who celebrated Biden’s election and whose newspaper endorsed him, is now at odds with the president.

At the same time, we are told by one Supreme Court justice that people are losing trust in the court. And an April Gallup poll tells us that Congress’ approval/disapproval ratings gap is widening, with disapproval at 76%. 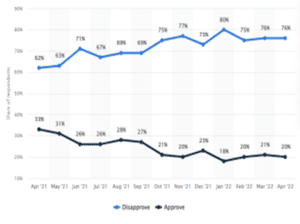 Whatever the other political differences that are dividing the people, there is universal concern about inflation. The latest Pew Research poll shows that more than 9 out of 10 Americans call inflation a “big problem,” leading all other issues.

Since money is half of every commercial transaction, and the Fed bears responsibility for the value of our money, the Fed has a hand in practically everything we do. Although it’s the mother of all regulators, few people understand what the Fed does or even pay much attention to it. So, it typically flies beneath the radar of public attention.

But that changes when inflation is racing ahead at a 40-year high and stagflation appears on our doorstep.

RELATED: Stagflation is Here, a Recession Could Be Next. Are You Prepared? 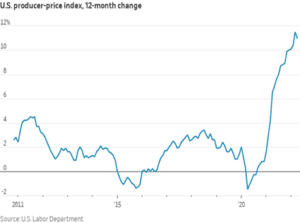 Then, as they should, people begin to think about the value of the money, their savings, and their future.

Still, the Fed betrays its confusion again and again. It missed the biggest economic downturn since the Great Depression. It missed the housing bubble. It missed inflation’s resurrection. Mostly it has failed to protect the dollar’s purchasing power.

Today, it takes $29.20 to buy what one dollar bought when the Fed was created in 1913. That is a cumulative inflation rate of 2820.3%, the sort of inflation that we associate with banana republics.

But 40 years of the Fed artificially contriving lower interest rates has temporarily covered up a lot of problems along the way. It provided an unsustainable wind of excess beneath the wings of the stock markets. Keeping the world awash in a flood of money made up at no cost has enabled a boom in cryptos and in zombie corporations, companies that keep their doors open not because they are profitable, but because they have been able to borrow for next to nothing to service their growing debt.

The Fed’s artificially repressed rates have similarly convinced Congress that it can spend without restraint since the government has been able to borrow at rates so low they amount to little more than a rounding error. After being its enabling bagman for 40 years, the Fed can’t expect Capitol Hill to suddenly discover fiscal responsibility.

Now, with its May interest rate hike and the assurances of more to come in quick succession, the crypto boom has turned into carnage. Zombie companies are ready to give up the ghost. The Fed’s policy pivot has even triggered a stampede from some of our era’s most popular companies, like Netflix, Amazon, and Tesla.

It’s plain to see in the recent actions of our financial markets that we are beginning a process of de-leveraging and de-risking. That is because confidence is beginning to crack up.

Money that is issued without check, without restraint, at no cost; money that is unbacked and irredeemable; money that is emitted at the behest of politicians and cronies, whether printed on paper or created digitally with a keystroke; such money is a confidence game. Only confidence gives it a passing value. As the victims of scamsters from Charles Ponzi to Bernie Madoff have learned, only those who get out early, those who lose confidence before it is too late, get out whole.

When confidence fails, gold is the logical alternative for safety and wealth preservation. For good reason.

Gold is the only financial asset that is not someone else’s liability. It’s not dependent on someone else’s solvency, promise to perform, or honesty. Gold’s value doesn’t depend on the endorsement, propriety, or honesty of any state or institution. It has no counterparty risk, no risk of rule changes, nonpayment, default, or bankruptcy by individuals, companies, financial exchanges, institutions, and banks – quite apart from being insulated from the risks of the Fed’s fiat dollar as well.

We are in a debt bubble that, like all bubbles, will end badly. In times like these, with confidence in our institutions cracking, gold is everything you want and nothing you don’t want.