Biden’s four economic horsemen of taxation, spending, debt, and money printing are on the horizon. See what the experts say.

HERE COME THE FOUR HORSEMEN OF THE BIDEN APOCALYPSE!

Since ancient days, the four horsemen of the apocalypse have been identified as War, Famine, Pestilence and Death.

That is a deadly foursome, to be sure.  But now, two months into his presidency, the shape of Joe Biden’s policies are becoming clear on the horizon.  We can see that he is spurring on the four horsemen of an economic apocalypse.  They are stampeding your way.

Today we will tell you what they are and recommend gold (and silver) as the preferred safe havens from the devastation headed toward your wealth and retirement.

Let us look at each one.

Taxes are not just going up.  They are going way up!  At last report $4 trillion higher!  Very few people are positioned to change policies that are on the fast track, but you can make sure you are not it its pathway.

The tax plan is a work in progress, centering around these points:  Corporate tax rate to increase from 21 to 28 percent; raising the capital gains tax for some from 20 to 39.6 percent.

Another reason to buy gold now is Washington will likely add $3 trillion of debt again this year.  This comes soon after $1 trillion in new debt in any year was considered a headline event.  But now multi-trillion-dollar deficits are becoming the new normal.

In pointing out just two weeks ago that the national debt had topped $28 trillion, we wrote that it was on the fast track to $30 trillion.  But there is even more red ink on the drawing boards now.

The Biden spending horseman, polishing up its armor after a victory on the $1.9 trillion stimulus bill, is now looking at two massive appropriations bills:  both an infrastructure measure, and a social spending bill that will include paid leave, universal pre-kindergarten schooling, and free community college tuition.  These are measures of unknown dimensions, although many are guessing the price tag will be at least $4 trillion.  Like the stimulus bill, both these measures will quickly get loaded down with pork and crony spending payoff additions as they work their way through congress.

Many experts believe buying gold now is a smart move when the printing presses start. In the words of Lew Rockwell, “The government spends what money it has and prints what it doesn’t have.”  Last year the Federal Reserve purchased 54 percent of net new Treasury debt – with made-up, digitally printed money.

We have pointed with alarm along the way to this rate of Federal Reserve money printing.  Since the beginning of 2020 it has printed $3.5 trillion.  Here is a chart that makes clear the extremes of Fed money printing since 2008. 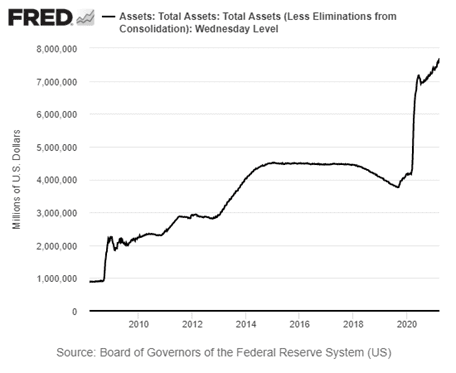 “If you knew that you were going to be charged twenty percent by selling your stock in 2021 or almost 40 percent in 2022, when would you want to sell your portfolio? The answer is obvious.  If everybody tries to beat the 2022 deadline, expect a massive stock market sell off before the ink is even dry.”

We know that Bartiromo is right.

The consequences of large changes in tax rates – tax cuts or tax hikes – are enormous.  And the smart money watches these measures and their progress carefully.  For example, because the famous Reagan tax cuts were backloaded, what finally turned out to be a powerful recovery from the recession of the early 80s was delayed.  People put off many helpful economic activities until the cuts were completely phased in.  The Smoot-Hawley tax hikes (tariffs) of the 1930s began casting a dark shadow ahead of themselves even before they had finished working their way through congress.  In his book The Way the World Works, Jude Wanniski carefully tracks the legislative history of the tariff taxes until their passage, concluding they triggered both the 1929 stock market crash the prior October and the ensuing Great Depression.

As the Biden tax hike nears enactment, is certain to send many stock investors racing for the door all at once to realize their gains at today’s lower rate.  That will pull the rug out from under share prices. Which we likely cause many to buy gold for a haven.

It makes sense now, while stocks are perilously perched at all-time highs, to avoid the rush for the exits, and take profits at today’s lower tax rates and lock your profits in with gold, a haven from the economic apocalypse of ruinous spending, debt, and money printing.

Not only will you avoid the coming regime of higher capital gains taxes, in doing so today you will be taking advantage of a correction in gold, adding the world’s most resilient and enduring monetary asset to your holdings while prices are especially favorable, 17 percent below their all-time high.

Doesn’t it make sense to sell high and buy low?