Are You Ready For 25% Inflation?

Wharton finance professor Jeremy Siegel expects inflation to climb 20 to 25% over the next few years.

When the Federal Reserve insisted that inflation would be transitory, it meant that the current inflation rate would soon give way to an even higher one.

But of course, we’re being facetious. The Fed meant no such thing. It never warns about coming inflation. That would only encourage some to move money out of the dollar and into gold.

By now, the Fed’s call on inflation has become a laughingstock. One analyst came up with the term “persistently transitory.” That belongs among other champion oxymoron contenders like “deafening silence” and “genuine imitation.”

He displayed a jar labeled “transitory,” depositing a dollar each time he used the “swear word.” It’s clear, Bostic said, that this period of rising prices won’t be brief.

What does it mean if inflation is not going away?

It means “we’re headed for some trouble ahead!” That is the view of Wharton finance professor Jeremy Siegel. “Inflation, in general, is going to be a much bigger problem than the Fed believes!”

How much bigger? Speaking at a Forbes advisor summit last week, Siegel said to expect 20 to 25% inflation over the next few years.

When the Fed printed trillions of dollars and it sat quietly and inertly in the required reserves that banks parked at the Fed, without entering the consumer economy, it didn’t drive consumer price inflation. But that has changed and now the Fed’s money printing is breaking out.

Siegel suggests that we’ll see price inflation of 5-7% over the next several years.

Oil prices have already broken out over $80 a barrel. According to Bank of America, the price may climb another 25% in just a few months. A cold winter could see prices rise to more than $100. 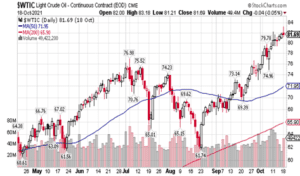 Stephen Roach, former Morgan Stanley Asia chair, now at Yale University, reminds us that those who insist this inflation is transitory are singing the same tune the Fed’s choir sang in the 1970s. Back then the lyrics were all about the OPEC oil embargo and El Niño weather patterns. They were not watching the Fed’s explosion of money creation.

“Central bankers haven’t a clue about the links between their asset holdings and the forces of supply and demand that are currently wreaking havoc on inflation,” said Roach. “Echoes of an earlier, darker period of economic history are growing louder.”

Maybe Siegel is correct that inflation will run to only about 20–25%. We’re skeptical.

In the last 18 months, Washington has spent $5.7 trillion on relief and stimulus packages. Now it wants to spend another $3.5 trillion. And where will that money come from?

They’ll print it, of course. And the value of the dollar, your dollar salary, and your dollar savings will disappear even faster, leaving that 5% inflation in the rear-view mirror.

Let us help you protect your wealth and future by providing you with a free one-on-one consultation.