In this time of extreme monetary disorder and policy confusion, we believe that investors seeking both long-term wealth preservation and profit should accumulate substantial gold positions ahead of the next breakout. Here's our top ten reasons why... 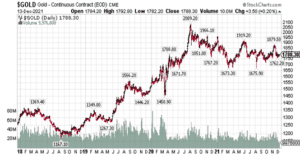 Since then, through the pandemic, shutdowns, and the COVID recession, gold has been in a heavy consolidation pattern of mostly sideways trading. In this period of extreme monetary disorder and policy confusion, we believe that investors seeking both long-term wealth preservation and profit should use the opportunity to quietly accumulate substantial gold positions ahead of the next breakout.

Here are the top 10 reasons for this recommendation:

#10: Confidence in the Federal Reserve has collapsed

A currency that is not redeemable in gold is held aloft only by confidence. When confidence in the issuer collapses, the currency’s future as a store of value is in doubt.

Today’s loss of confidence in the Federal Reserve is unprecedented, yet it is self-inflicted and well-deserved. The Fed has a long history of misunderstanding major market events like the housing and dot-com bubbles, and this episode ranks along with those. Prior Fed Chairman and current Treasury Secretary Janet Yellen predicted in August that consumer prices would revert to trend by now. They have not, but it was her way of underscoring current Fed Chairman Jerome Powell’s insistence throughout the year that inflation was only “transitory.” Both officials have now finally run up the white flag, offering to retire that word.

Many believe that it is not the word, but the policymakers that should retire. Meanwhile, overall consumer confidence in the U.S. economy is at a 10-year low.

If the management of monetary conditions has been reckless in its extremes and clueless about inflation, expect more analysis of the same quality. Under Powell’s leadership, the Fed has pivoted and pirouetted from one plan to the next. CNBC reports, “The Powell Fed, in fact, has become almost as known for its abrupt changes in direction as it has for the unprecedented levels of stimulus it has provided during the pandemic.” The word “transient” is better applied to Fed policy positions than to inflation.

8#: Inflation is a worldwide problem

Wholesale prices in Germany were up 16.6% in the 12 months ending in November. That is the biggest inflation jump in half a century.

China’s Producer Price Index for the 12 months ending in October was up 13.5%, while double-digit price increases the order of the day in Brazil, Latin America’s biggest economy.

Worldwide consumers seeking inflation protection represents a powerful fuel for the next leg of the gold bull market.

The Organization of the Petroleum Exporting Countries (OPEC) oil cartel and producers like Russia have returned to a position of “positive leverage” in oil pricing. That is according to JPMorgan analysts who say the price of oil will test $125 a barrel next year, on its way to $150 in 2023.

They are not alone in that prediction. Jefferies Global Head of Equities, Chris Wood, describing supply constraints, also says oil could climb to $150. “It can go much higher and that can definitely escalate an inflation scare,” he said on CNBC’s “Street Signs Asia.”

#6: Forget the hoopla and the new announcements. Future inflation is already in the pipeline

We point repeatedly to Nobel-prize winner Milton Friedman’s discovery that there is a lag between the Fed’s money printing and the time it works its way into higher consumer prices. Some today believe that lag can persist for up to two years. So, if the Fed intended to stop next year’s inflation, it should have done something about the growth of money and credit last year.

But all the Fed did last year was increase the supply of money and credit.

When and if the Fed ever decides to stop inflating, the cost of living is likely to continue rising – or more clearly, the purchasing power of the dollar will continue falling – for a long time to come.

#5: The Federal Reserve is the buyer of the last resort for U.S. Treasury debt

The U.S. has been funding its massive debt with the printing press. Yet the spending continues to grow.

In the last 24 months, the national debt has grown by $5.858 trillion. In that time, the Fed funded $3.344 trillion of that additional debt by purchasing U.S. Treasury debt securities with money it created out of thin air.  Stated differently, the Federal Reserve purchased 57% of U.S. debt issuance over the last two years with money it digitally printed.

If the Fed tapers its debt purchases, who will loan the U.S. government trillions of dollars, especially for today’s negative real interest rate returns? And how high will interest rates have to rise to attract real buyers to replace the Fed?

This leads directly to the fourth reason to accumulate gold now.

#4: The Fed has painted itself into a corner

As we have described conditions as they developed, the Fed’s ill-advised monetary policy extremes have left it with no options going forward that do not result in a calamity.

“Though the Dow is at an all-time high and the official rate of unemployment rate remains low, economic growth has been sluggish. The economy grew at an annualized pace of only 2% in the third quarter, far below expectations. If the Fed raises interest rates — even if only a little — it would undoubtedly risk bringing the economy into recession.  However, to bring inflation under control, the Fed must raise rates in 2022, and the rate hike must be far more than a quarter of a percent here or there…  But if Powell doesn’t act – if QE doesn’t rapidly end and interest rates do not move significantly upward – the Fed risks inflation heading into double digits in 2022, just as Americans saw in the 1970s…

Make no mistake, the Fed is the true culprit behind our latest inflationary crisis.”

#3: The falling purchasing power of the dollar

The trajectory is clear. This chart shows more than a half-century of the declining purchasing power of the dollar (in green) and the rising price of gold says it all. 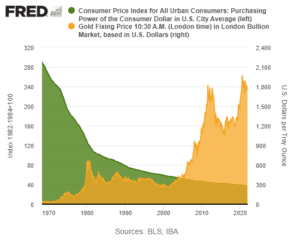 #2: U.S. inflation is close to double-digits

That is close enough to double-digits for government work.

U.S. consumer prices climbed 6.8 % for the 12 months ending in November. That is the biggest increase in almost 40 years.

And the #1 reason you should accumulate gold in this market

The crossroads of history are littered with the worthless paper currencies of governments gone by. Even when governments pretend to compete with gold as a monetary standard and for wealth preservation, even when they disparage gold by calling it a mere “yellow rock,” or a “barbarous relic,” or seek to make gold ownership illegal, still those governments seek by means fair and mostly foul to acquire the peoples’ gold for their own private vaults and treasuries.

Gold is mankind’s enduring currency of choice and a necessity for wealth preservation during periods of monetary instability.